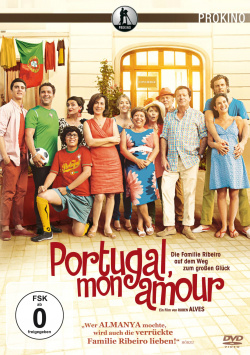 Film: Maria (Rita Blanco) and her husband José Riberio (Joaquim De Almeida) have been living in France for almost three decades now. While José, foreman of a construction company, is highly esteemed by his employer and his colleagues for his skills and his helpful, always friendly nature, Maria, as concierge in a stately house in the 16th arrondissement in Paris, has long since advanced to the good soul of the house. Although the couple never misses an opportunity to celebrate their culture extensively with other exiled Portuguese people in their neighborhood and they have fully integrated into their adopted country with their children Paula (Barbara Cabrita) and Pedro (Alex Alves Pereira), they still dream of a life in Portugal. This dream could unexpectedly become reality when José learns that he has inherited the family estate including the vineyard from his recently deceased brother. However, the inheritance is subject to a condition: The Riberios must continue the family business from Portugal. Although their children wanted to stay in Paris, Maria and José decided that they wanted to take up the inheritance. But first they have to teach their employers, their friends and their other family members that - and that proves to be much more difficult than expected...

"Portugal, mon amour" is a likeable little comedy that has quickly developed from an insider tip to an absolute darling of the audience not only in France but also in Portugal. Responsible for this are, on the one hand, the lovably drawn characters, which at first glance seem to be stereotyped clichéd characters. But in the course of the story director Ruben Alves plays so skilfully with these clichés that his characters acquire a charming charm of their own. Also successful is the way in which Alves thematizes migration problems in such a way that they can be recognized by the viewer, but doesn't deprive the film of anything of its wit and warmhearted lightness.

The humor of the film fluctuates between classic screwball comedy and typical culture clash comedy, sometimes has very obvious laughs, sometimes smaller, hidden jokes. In between, the script always finds time for more emotional, calm moments, which also gives the characters and the story a pleasant depth. Thus Alves manages to build up a community with which viewers simply love to spend time.

"Portugal, mon amour" may end up lacking a little bit of bitterness and sustainability. But even if the comedy gives the impression of simply being "nice", this is not to be seen here in a negative sense, true to the motto: "Nice is the little sister of Sch...". No, "Portugal, mon amour" is nice in the sense that you feel comfortable watching it and leave the cinema with a comforting smile on your face. The film offers lovers of light French comedies 90 minutes of pleasant everyday escape, without being too silly or over-excited and unreal. The fact that the big wow effect is missing is really easy to get over. That's why there's a deserved one for this little charmer. Worth seeing!

Picture + sound: Since only a data-reduced press stream was available for the test, no rating can be given here for the final picture and sound quality.

Extras: As a bonus there is a short interview featurette (approx. 5:41 min.) on the DVD, as well as further mini documentaries about Portuguese life in France (approx. 2:20 min.) and about Fado (approx. 1:21 min.). Nine unpublished scenes (ca. 9:46 min.), as well as some quite funny mishaps and slip-ups (ca. 9:47 min.) round off the additional offer with a photo gallery and the trailer.

Fazit: "Portugal, mon amour" may lack a bit of bite and wit here and there. All in all, however, this charming comedy with its likeable actors and amusing story offers 90 entertaining minutes, which can be warmly recommended to lovers of light French comedies that radiate a lot of joie de vivre. Recommended