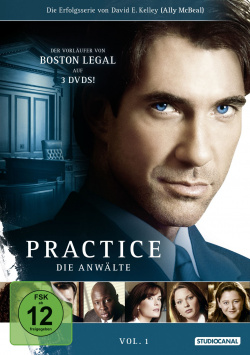 Contents: Former lawyer David E. Kelley is the undisputed master of the American court series. Whether as an author for "L.A. Law" or as the creator of "Ally McBeal" and "Boston Legal", Kelley has always skilfully combined his former profession with mass entertainment. Rousing cases, which at times have triggered controversial discussions, are just as important to him as bizarre humour and accessible characters. Even in his series, which do not play directly in court ("Boston Public", "Picket Fences" or "Chicago Hope"), justice and court trials were repeatedly thematized.

Also in "Practice - Die Anwälte" Kelley showed his great talent for rousing stories and well drawn characters in eight seasons. Somewhat less playful than "Ally McBeal" and more serious than his direct successor "Boston Legal", the series is dedicated to the everyday struggle of the law firm for Bobby Donnell (Dylan McDermott) for justice for their clients. No matter whether murder, robbery, dog bites or drug offences, no case is too small or too big for the firm to reject - as long as the lawyers are convinced that their clients are innocent.

Almost 17 years after the first episode was shown on US television, the first DVD box in Germany is finally released. It contains not only the complete, very short first season, but also the first episodes of the second season. The series does not spend long introducing the characters and the dramaturgy. Rather, the viewer is pushed directly into the hectic daily work of the committed lawyers and thus gets to know Bobby Donnell and his colleagues with all their professional strengths and personal weaknesses. And in the first episode, the basic tone of the series is established, which is gradually refined. While some cases deal with very difficult topics and raise fundamental questions about morality and justice, other moments are much more relaxed and humorous.

The good character drawing, which also characterizes this David E. Kelley series, only becomes clear in the course of several episodes. But what is already apparent in the pilot sequence are the strong dialogues, which hardly lose any of their quality in the successful German dubbing. So it's hardly surprising that the pleas are often among the strongest moments of the individual episodes, since the expertise of series creator Kelley also makes a positive impression here.

While most episodes deal with self-contained cases, there are also some negotiations that stretch over several episodes. The same applies to the private life of the lawyers, which also plays an important role within the series. The mixture of professional and private sides of the figures results in a very stirring overall picture, on the basis of which the series was awarded 15 Emmys and 3 Golden Globes in the course of its eight seasons. Even though the series doesn't quite reach the quality that unfolded in the course of the second and third season at the beginning, this first DVD box makes it very clear that "Practice - Die Anwälte" has more than earned each of these awards. If you like US lawyer series and appreciate the style of David E. Kelley, you should definitely take a look here. Absolutely recommendable!

Picture + sound: The age of the series is quite noticeable in the audiovisual implementation. The picture in the original 1.33:1 full screen format looks rather soft and has only a few moments to offer when the picture is really sharp. Moreover, a certain coarseness is noticeable in many scenes, here and there a slight picture noise can also be detected. Overall, the picture is thus somewhat on a par with TV broadcasting. The same applies to the stereo sound, which transports the dialogues out of the speakers in a clear and powerful way, but otherwise sounds rather dull. For a 17 year old TV series this is altogether okay, which is why the bottom line is that there is also a "good".

Extras: The only extra is a featurette (approx. 17 min.) worth seeing about the creation and production of the series. Not much, but a worthwhile encore for fans of the series!

Fazit: With "Practice - Die Anwälte" David E. Kelley created another great lawyer series, which offered eight seasons of good entertainment and exciting stories between 1997 and 2004. Now finally the first thirteen episodes on DVD come out, in which the series hasn't quite found its later quality yet, but in which the strengths of the "Boston Legal" predecessor lie very clearly. Good actors and cases, which always inspire interesting discussions and a successful mixture of drama, tension and humor make Vol. 1 of "Practice - Die Anwälte" an absolute must for all lovers of first-class lawyer series. Fortunately Vol. 2 is not long in coming! absolutely recommended!