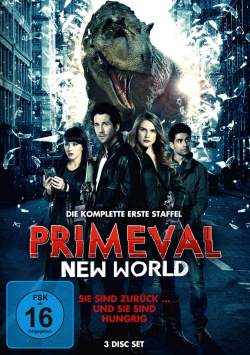 Content: The primeval monsters of "Primeval" are loose again. After the anomalies in England were closed, a Canadian team now has to deal with hungry dinosaurs and other creatures that find their way to the present through time portals. The inventor Evan Cross (Niall Matter) lost his wife to a dinosaur some time ago. Since then, he has been trying to uncover the secret behind the anomalies with the company Cross Photonics founded especially for this purpose. Together with animal behavior expert Dylan Weir (Sara Canning), security specialist Mac Rendell (Danny Rahim), former government official Lieutenant Ken Leeds (Geoff Gustafson) and ingenious technician Toby Nance (Crystal Lowe), Evan wants to protect the world as best as possible from primeval monsters. His business partner Ange Finch (Miranda Frigon) ensures in the background that he always has the necessary financial means at his disposal. However, as anomalies increase and prehistoric attacks claim more and more victims, it becomes increasingly difficult for Evan and his team to keep the existence of this danger a secret...

Less than a year after the British series "Primeval - Return of the Prehistoric Monsters" ended, "Primeval: New World", a North American spin-off, was launched. The concept of the original was largely retained, with other locations and a new team providing a breath of fresh air. In addition, the effects can be seen in most cases, which significantly increases the fun factor of this spin-off. The fact that the series still can't entertain as well as its predecessor is certainly not due to the innovations, which should be made more accessible for fans by two guest appearances of Andrew Lee Potts from the original series. Rather, it's simply because, despite all efforts, a well-known material was simply reheated with a few new ingredients and the end result simply doesn't taste quite as fresh and surprising anymore.

Nevertheless, this first - and unfortunately the only - season of "Primeval: New World" is far from being a disappointing or even weak series. In addition to the special effects already mentioned, which bring out some of the dangerous primeval monsters, the thirteen episodes also feature some really exciting stories and likeable main characters. The monsters have to be fought on land, under water or in the air, in the present or in the past - and this always ensures visually successful and excitingly staged adventures. Fantasy, action, suspense and a little humour - these are the ingredients with which this production can convince. Genre-experienced writers and directors, including Stargate star Amanda Tapping, also ensure that fans of SciFi/Fantasy series get their money's worth.

Although the dramaturgy and the character drawing sometimes seem a bit clichéd and the dialogues certainly aren't suspicious of prizes, the relatively low ratings that led to the discontinuation of the series are absolutely not justified. Despite its weaknesses, "Primeval: New World" is very successful TV entertainment, which not only presents itself technically on a good level. Therefore, anyone who liked the original series or generally appreciates series with fantasy and SciFi elements can confidently go on a hunt for bloodthirsty primeval creatures with Evan Cross and his team. Worth seeing!

Picture + sound: Picture and sound quality of the series are on a good TV level. The image is sharp and shows small details, especially in the brighter outdoor shots. The colours are powerfully mixed and the contrasts are also convincing. The sound in Dolby Digital 5.1 has some nice surround effects to offer. The dialogues are powerfully mixed, but in the original English version they appear a little more harmoniously embedded in the tonal events than in the German version. Overall, the audiovisual implementation of the series deserves a satisfied "good"!

Extras: The DVD box has some nice extras to offer. On all three discs of the episodes 1-10 there are short making of documentaries (each between 1:30 and 2:30 min.), in which a look is taken at the shooting. These are very short, but very entertaining and informative. On the third DVD there is also a short documentary about the line-up (approx. 6 min.), as well as a visit to the Cross Photonics set (approx. 1 min.). All in all not very extensive, but well worth seeing for "Primeval" fans!

Fazit: "Primeval: New World" is an entertaining spin-off of the popular British series "Primeval - Return of the Primeval Monsters". North American production is systematically continuing the concept of the original, which was discontinued in 2011. And even if the entertainment level of the British predecessor cannot quite be reached, the 13 episodes can still score with good effects, exciting stories and a friendly team. Those who liked the original and appreciate entertaining fantasy entertainment will be well entertained in this series. Recommended!