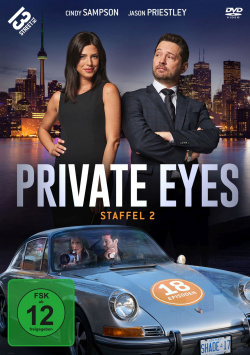 Content: Matt Shade (Jason Priestley) and Angie Everett (Cindy Sampson) are back in Toronto as private detectives, fighting not only all sorts of bad boys (and ladies), but also the sparks that are sparking between them and don't necessarily make working together any easier. But not only Angie is forgiven, Shade also finds a new girlfriend in the lawyer Mel (Bree Williamson). Can the two of them finally concentrate fully on their work? They have to find out who is threatening the drivers of a successful racing team, find the missing fiancée of a star conductor, guard an exclusive fashion collection and have to investigate on a medieval spectacle. It never gets boring in Shade and Angie's life - and then a competing private snooper (William Shatner) gets in their way as well…

The first season of the Canadian series "Private Eyes" was a surprise insofar as it offered old-school crime entertainment to the viewers. Without fast cuts, without much bells and whistles, but with charming main characters and entertaining, self-contained cases. In times in which TV series are becoming more and more complex and want to offer their audience more and more in terms of action and speed, such a series, which comes along relatively unagitated, is almost a rarity. Sure, she doesn't reinvent the genre, but uses its best aspects to her advantage.

This concept will be maintained in the second season and only marginally changed. There is a new office, an assistant, new loves and - this is particularly positive - significantly more episodes than in the first year. The relationship between Matt Shade and Angie Everett gets a bit more interesting, as they both know each other better now and there is a certain chemistry, which will provide a lot of explosives. But apart from that, the series continues on the path it took at the beginning. And if you like classic crime fiction food, like it was seen in abundance in the 80s and 90s, you'll love this series.

A special highlight of season 2 is of course the guest appearance of a very famous Canadian: William Shatner, once known as "T.J. Hooker" himself star of a crime series, convinces once more with a good portion of self-irony, for which you simply have to love the "Star Trek" icon. But Samantha Wan is also a real enrichment for the series as a client who becomes an assistant. And then, of course, there's the city of Toronto, which provides the makers with some really atmospheric motifs that lend the series a very special atmosphere...

"Private Eyes" is perhaps not the most exciting and original crime series. But she is currently one of the most charming and entertaining representatives of her genre. And that's why there are clear indications for the new consequences as well: Absolutely worth seeing - Season 3 can come!!

Picture + Sound: Like Season 1 the new episodes can convince in terms of picture as well as sound mix. Of course, the implementation cannot keep up with a large cinema production. But the very clean picture leaves a positive impression all around with its atmospheric colouring and the proper overall sharpness. The Dolby Digital 5.1 Mix focuses on dialogues. But there are also some good surround moments here again, which provide a little movement in the sound backdrop. Gut!

Extras: Interested fans of the series will find a number of short features about the new episodes spread over the first four DVDs. It starts on DVD 1 with an introduction to season 2 (ca. 4:36 min.), followed by a look behind the scenes of Episode 1 (ca. 3:56 min.) and Episode 4 (ca. 3:09 min.). The second disc offers a look at the upgrade in the detective agency (approx. 4 min.) and the shooting in Toronto (approx. 2:56 min.). Personally it becomes on Disc 3, because here the flirting in the series takes center stage (approx. 5:34 min.). So that it doesn't get too romantic, we continue with the stunts and effects (approx. 3:43 min.). Finally, two featurettes on Disc 4 look at Shades Porsche (approx. 3:21 min.) and the family ties (approx. 3:48 min.). The short documentaries are all really worth seeing, but in most cases they are simply much too short. Especially the locations in Toronto or the insights into the shooting could have been treated in more detail. Nevertheless: All in all a good bonus package!

Fazit: "Private Eyes" enters the second round with 18 new episodes. The series doesn't necessarily evolve, but focuses more on its strengths, which is why the new season is even more fun than the first ten episodes. The chemistry between Jason Priestley and Cindy Sampson is just great and makes for some really nice moments. This is old school crime thriller entertainment - not revolutionary, but extremely entertaining. The DVD box can convince audiovisually and also offers fans some nice extras. That's what it's all about: Absolutely recommendable!