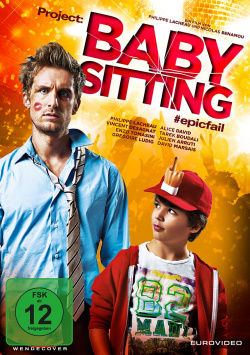 Film: Franck (Philippe Lacheau) dreams of one day working as a successful comic artist. But so far he has only managed one job at the reception of a comic publisher. But for his dream he would do anything - even on his 30th birthday to look after the son of his arrogant boss Marc Schaudel (Gérard Jugnot), while he and his Claire (Clotilde Couraeu) will go to another prestigious event over the weekend. But not only 11-year-old Rémy (Enzo Tomasini) is not enthusiastic about it. Even Franck's best friends don't like the fact that their buddy has to spend his 30th as a babysitter. And so they move his birthday party to Marc's pretty villa. Already after a few minutes the big buzz threatens to get completely out of hand. But that's nothing compared to the chaos the babysitter is facing that night...

"Project: Babysitting" was such a big success in France that a sequel is already finished. The turbulent mixture of "Hangover", "Project X" and other party comedies, mixed with the harmonious chemistry between leading actor (and co-director) Philippe Lacheau and the young Enzo Tomasini was extremely well received by the audience. Although strictly speaking the movie doesn't have any ideas of its own to offer and you have the feeling in every scene that you've seen them somewhere else before, the comedy works very well over large parts. The mixture of "normal" feature film and "found footage" look isn't new either, but it's a good fit for the story's structure.

The humor is not very subtle and some gags are so clearly prepared that you can only smile tired when they're executed. That leads to the fact that the really big laughs unfortunately are missing. That doesn't mean, however, that the film isn't fun. This is due to the fact that the actors are quite likeable and that it is skillfully avoided that the gags drift too much into tastelessness. Thus, the turbulent hustle and bustle has a pleasantly engaging charm, despite a few nuances, which comforts many a weakness. As a viewer, you know exactly where the journey is going and what message the film wants to convey. Nevertheless, one likes to accompany Franck and Rémy through the wild night and is happy when one realizes that after initial difficulties the two slowly become friends.

"Project: Babysitting" is thus simply knitted comedy entertainment in the best sense of the word. As a viewer, you know exactly what you're getting. And even if that's not surprising, it's served in such an entertaining and amusing way that the lack of originality is hardly noticeable in a negative way. Moreover, the movie delivers a pleasant pacing, so that tenacious moments are very well avoided and boredom has no chance. So at the end of the 81 minutes a positive overall impression remains, which despite the mentioned weaknesses allows only one conclusion: Worth seeing!

Picture + Sound: There is hardly anything to criticize about the technical realization of the comedy. While the sound remains rather reserved even in the more powerful DTS mix, due to the genre, the very clean picture can offer a high sharpness of detail and coherent contrasts. However, the digitally filmed event visually appears somewhat flat in some places. The authentic colouring, on the other hand, underlines the overall positive impression of the picture.

Fazit: "Project: Babysitting" is a turbulent comedy, which stole almost all ideas from other movies, but served them fast and relatively charmingly, so that as a fan of comedies like "Hangover" or "Project X" you can have fun at this turbulent party night. The DVD presents the film in appealing picture and sound quality, the extras are nice, but a bit short. All in all this is enough for a satisfied one: Recommendable!