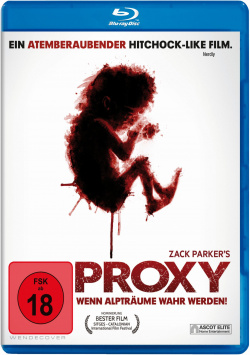 Film: Esther (Alexia Rasmussen) is about to give birth to her child. But on her way home from the last visit to the doctor before the birth, the young woman is brutally attacked and beaten up. When she wakes up in hospital after a serious emergency operation, she learns that her unborn child is dead. The loner, who has become pregnant through a sperm donation, falls after this incident into a deep hole from which she can no longer free herself. She therefore reluctantly decides to visit a self-help group. There she quickly makes friends with Melanie (Alexa Havins), who has lost her child herself. A close bond quickly develops between the two women, which threatens to break abruptly when Esther accidentally discovers that Melanie has lied to her apparently boldly. This breach of trust triggers something in Esther that leads to a catastrophe with serious consequences...

"Proxy" is a cleverly constructed thriller that not only brings back memories of Alfred Hitchcock's films because of a very special stylistic device. Director Zack Parker skilfully leads the audience astray in the first hour to steer the action in a new, unexpected direction after a really shocking sequence. But even here, not everything is as it seems. Admittedly, at times the script shows just as clear weaknesses as the play of some actors. And the rather manageable budget is not exactly positive for the staging in some moments. Nonetheless, Parker has created a disturbing and oppressive psycho-thriller that gets really evil in the end.

Although it was really necessary to extend the story to two hours, it's doubtful. The rather slow narrative tempo supports the effect of the few shock moments. But some scenes would have really benefited from a clear tightening. Although both Parker and his actors honestly try to keep up the oppressive mood of the movie even in those moments, they don't really want to succeed. And so, unfortunately, from time to time, there is a bit of boredom.

Nevertheless, "Proxy" is absolutely worth seeing on the bottom line. Because both as a psycho-thriller and as a drama the movie has extremely strong moments, which will remain in the viewer's mind for a long time and will keep him busy for a long time. It's hard to just shake off the movie after its ending, because despite its lengths and the many quiet moments, it has a great intensity. Surely the film is far from being a masterpiece, but the script, the production and the actors have their weaknesses. But as a gripping piece of independent cinema and captivating psycho-trip the multi-layered story works very well. Therefore, if you can get involved with the pacing and the staging style, you will get an effective thriller drama, for which there is a clear "worth seeing" at the end!

Picture + sound: At the Blu-ray the low budget production is presented in an appealing audiovisual implementation. The image is absolutely clean and the sharpness is at a good level. The contrasts in some scenes seem a bit overdone, which, however, can also be seen as a deliberately used stylistic device. The colour scheme is atmospheric and can be absolutely convincing over long distances. In most scenes, the sound is dominated by the powerfully mixed voices, but now and then smaller and clearer sound effects also ensure good utilization of the surround channels. Good!

Extras: Besides a general look behind the scenes (ca. 6:18 min.) there are seven Behind the Scenes clips (ca. 23:37 min.), three interviews with Alexia Rasmussen, Joe Swanberg and Alexa Havins (ca. 25:27 min.), as well as the trailer and further program tips of the provider. Gut!

Fazit: "Proxy" is a cleverly constructed and oppressive thriller, whose first big twist in the middle of the movie is not new, but still surprisingly implemented. The final twist is evil and comforts over some small lengths and weaknesses in the script and supporting actors. Some of the somewhat disturbing moments remain in the viewer's mind for a long time, which makes the movie absolutely worth seeing, especially for friends of evil psychodramas. On Blu-ray the production presents itself in good picture and sound quality and the bonus material offers some decent background information. It's not enough for a masterpiece, the script, actors and staging are simply not good enough. A surprising and effective thriller is always offered here and there is a clear one for that: Recommendable!