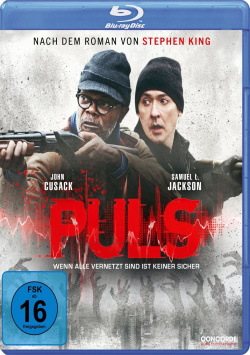 Film: One of Stephen King's specialties is to create horror from the everyday. He also succeeded in doing this in his novel "Puls", which has now been filmed with John Cusack and Samuel L. Jackson. The horror comes this time in the form of mobile phones, more precisely from a "pulse" that transforms anyone who is on the phone into an angry beast. The whole thing starts on a normal day when Clay Riddell (Cusack), who's in Boston on business right now after selling his first graphic novel, watches the world around him go bloody insane. Together with the subway driver Tom (Jackson) and the girl Alice (Isabelle Fuhrman), Clay manages to escape from Boston, whereby he wants to make his way home at all costs to find out whether his wife and son have also become victims of the "pulse". And so the three embark on a journey through an almost apocalyptic world in which there seems to be no future for the survivors...

With sometimes very drastic means King creates in his book the image of a self-destructive society that is driven mad by its "pulse". He does not save on sometimes very amusing side blows to modern pop culture and the American government. The people mutated by their mobile phones to murdering madmen remind a little of the contaminated "Zombies" from Danny Boyle's film "28 Days later". There is of course also the obligatory reference to George R. Romero's "Dawn of the Dead". In between, King once again succeeds in turning the protagonists into identification figures for the reader, which considerably increases the suspense potential of the end-time novel.

The filming of "Puls" is unfortunately not so effective - although King himself wrote the script. For a long time "Hostel" director Eli Roth was intended as director. It would have been interesting to see what a not exactly squeamish horror director like Roth would have gotten out of the original. Tod Williams ("Paranormal Activity 2"), on the other hand, can only conditionally build up the tension inherent in King's original book. A good example of this is the first scene at Boston airport. If most people there turn into angry beasts within seconds, then this has a certain shock and tension potential. But when the otherwise so reliable John Cusack stumbles through the scenery in a surprisingly cumbersome way, then the whole thing simply takes away its effectiveness.

Depth logic holes and flat dialogues are not uncommon in this genre. But unfortunately there are other weaknesses here. In a plane crash or an explosion, for example, the special effects prove to be extremely poor, which almost seems involuntarily funny. And the ending King rewrote especially for the movie also seems a bit loveless. "Pulse" has some good moments, no question. And even if the actors don't deliver any brilliant performances, the chemistry between John Cusack and Samuel L. Jackson is almost as good as in their last Stephen King collaboration in "Zimmer 1408". Nevertheless, in too many scenes it becomes all too clear that the movie lags far behind its possibilities and therefore only deserves a "worth seeing" movie to a certain extent.

Picture + sound: The technical realization of the film is very atmospheric. Even though there are some minor weaknesses in the detail representation and minimal image noise to be found in the darker scenes, the color scheme and the harmonious contrast mix capture the dark mood of the story very well. The targeted sound effects underline this impression. They ensure a pleasant dynamic on the surround channels again and again. Altogether there is an absolutely deserved one for it: Good!

Extras: Beside the trailer there is only a short Promo Making of (approx. 12:18 min.).

Fazit: "Puls" may not be one of Stephen King's best novels, but it offers plenty of potential for an exciting and thrilling horror film. Unfortunately, this has not become the adaptation of Tod Williams. In spite of some really effective moments, the movie is still lagging behind its possibilities. The Blu-ray presents the escape from mobile phone zombies in atmospheric picture and sound quality. The bonus offer is scarce and not worth mentioning. Altogether there is only one more disc for this disc with some exceptions: Recommended!