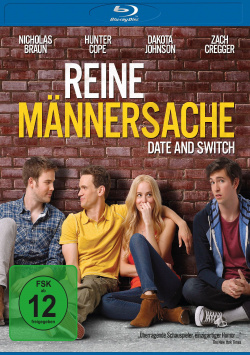 Film: Michael (Nicholas Braun) and Matty (Hunter Cope) have been best friends since their childhood and have survived all the ups and downs of life at high school together. So it is also clear that, since they finally want to lose their innocence, they end the same evening with their girlfriends, with whom simply nothing wants to run. Because her virginity should be a thing of the past by the prom at the latest. But this friendship pact takes an unexpected turn when Matty announces to his best friend that he is gay. First of all, Michael has difficulty coping with this drastic change. But then he realizes that this doesn't change anything about his friendship with Matty. And so he wants to help his buddy find a suitable candidate for the first time. But the new situation for their friendship is not as easy as the two of them imagined it to be. And the fact that Michael falls in love with Matty's ex-girlfriend Em (Dakota Johnson) doesn't make things any easier...

"Pure Men's Thing" begins like a typical teen comedy of the post-"American Pie" era. Here hormone-controlled pupils talk about sex and genitalia all the time and the fear quickly arises that this is just another Zoten posse. But even the scene in which it is shown how different the separations of Michael and Matty with their girlfriends are can at least dispel this fear a little. And at the latest from the moment Matty appears, the film turns into a charming and refreshingly relaxed coming-of-age comedy about friendship, finding a sexual identity and dealing with big changes.

Was there still one or the other gag of a more obscene kind and some small scenes already overshoot the mark. But all in all director Chris Nelson tells a really nice story with his second feature film, which skilfully avoids many common and obvious clichés. Instead, his staging relies on amusing dialogues and likeable characters whose behavior in many moments is all too human. Especially the drawing of the friendship between Matty and Michael is very successful. It is clear that Michael wants to stand by his best buddy and at first says that nothing will change for him. But little by little he realizes that Matty's confession has changed a lot and that he can deal with these changes more difficult than he thought before.

The fact that Matty's homosexuality still plays the central role on the surface, but in reality it's all about mastering the difficult threshold to adulthood and finding one's place in life, raises "Pure Male Matter" well above the level of many other high school comedies. Surely, those who expect a really sophisticated author's cinema here and quickly get bothered by very direct language will not be able to warm up much for this charming comedy. But if you have a general weakness for friendly buddy stories and entertaining teen comedies, you should not miss this home cinema premiere. Absolutely worth seeing!

Picture + Sound: The Blu-ray picture pleases with a very harmonious color scheme and a high image sharpness, which also in darker scenes shows hardly noticeable quality losses. As is the rule with a comedy of this kind, the sound is primarily determined by the dialogues and the soundtrack. The surround channels are used again and again, but a real multi-channel firework should not be expected. Good!

Extras: The bonus material of the Blu-ray is unfortunately available without subtitle options, which is why a good command of English is absolutely necessary. We start with a very sympathetic and interesting audio commentary by director Chris Nelson and screenwriter Alan Yang, who talk about autobiographical influences, the soundtrack and the shooting in Vancouver. After a very lively beginning there are some longer breaks in the second half of the movie, which is why listening to the commentary is especially worthwhile in the first thirty minutes.

Additional extras are seven edited scenes (approx. 8:42 min.), which also include an alternative ending, a short but proper making of (approx. 10:59 min.) as well as a featurette about the shooting of the prom scene (approx. 7:32 min.). Gut!

Fazit: "Pure Men's Thing" is a charming and quite funny comedy about friendship, finding a sexual identity and dealing with big changes. Even though director Chris Nelson makes use of the usual teen comedy humor every now and then, he always manages to avoid too worn out clichés and enrich his movie with very authentic moments. The Blu-ray presents the film in good picture and sound quality, the bonus material is worth hearing and seeing, but doesn't have any subtitle options. All in all this is enough for a more than satisfied one: Recommended!