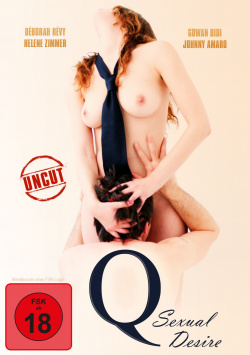 Film: 20-year-old Céline (Déborah Révy) falls into an emotional hole after the death of her father. She tries to fill the inner emptiness with sexual adventures, crossing borders again and again and breaking taboos to find what she so desperately seeks. The young Alice (Hélène Zimmer) also has dreams in which she finds fulfilment in her great love and thus escapes the clamps of her domineering mother. In Matt (Gowan Didi) she thinks she has found the great love. But all he seems to want is sex. Should she give him what he wants or take what she wants? Virgine (Christelle Benoit) no longer feels desire towards her husband. She has needs that he doesn't respond to at all. And so Virgine remains only the escape into a sexual illusory world...

Three women who try in very different ways to find themselves through sex, this is the central theme of the erotic drama "Q - Sexual Desire". The fact that director Laurent Bouhnik provokes with this film is already clear in the first scene of the film. It is a sequence in blue tones, set in a shower room and continued throughout the film. In this sequence, a group of women talks about love, sex and men, while the camera is initially focused only on the buttocks and pubic area of the women. Only later does the camera step back more and more, until at the end of the film the ladies can be seen in all their (and meanwhile also clothed) beauty. Such an attitude as the aforementioned opening sequence could easily trigger an outcry and be dismissed as pure sexism. One could, of course, argue that women here are degraded to faceless sexual objects. But on the other hand, the scene in its entirety can also be seen as a homage to the individual beauty and strength of the woman in connection with the dialogues.

Picture + Sound: The picture presents itself with a good overall sharpness, which can be seen especially well in close-ups, even smaller details. The colouring is very warm and pleasant. There is no evidence of soiling or image interference. The Dolby Digital 5.1 Mix presents itself quite unspectacular. Only here and there do smaller ambient noises such as sea noise provide a little movement in the otherwise centrally mixed dialogues. Good!

Extras: As a bonus the DVD has some cut scenes to offer besides trailers and a picture gallery. The first longer sequence is not a cancelled scene in the actual sense, but rather a long outtake with which Bouhnik wants to show what can go wrong during the shooting of a scene. Besides, there are also some smaller extended character moments, as well as a very tender sex scene, of which Bouhnik at the end says that he finds it a shame that he had to take out this sequence. Altogether not really extensive, but quite nice. A detailed interview with the director would certainly have been interesting.