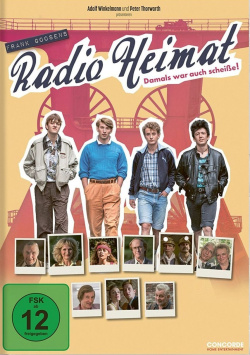 Film: Bochum, early 80s: The friends Frank (David Hugo Schmitz), Pommes (Jan Bülow), Spüli (Hauke Petersen) and Mücke (Maximilian Mundt) are in the middle of the pot and puberty. A complicated mixture. But it only gets really difficult when they are driven to all sorts of stupid things by the longing for their first great love and the first sex. Especially Frank tries to land somewhere between french fries, dance school and party cellar at his beloved Carola (Milena Tscharntke). But the road to becoming a man is extremely rocky and it takes many a defeat to recognize what really counts…

"Radio Heimat" is based on short stories by Ruhrpott-Kultautor Frank Goosen. But the film is much more than just a charming declaration of love to the pot. It is also a homage to the 80s and a wonderfully observed story about growing up, about friendship and the first great love. But you don't have to live in the Ruhrpott and have grown up in the 80s to succumb to the wit and charm of this comedy. But those who have experienced the music, the terrible fashion and such unavoidable things as party cellars that have shaped this era, or who know the lovable peculiarities of people from the pot, will of course have even more fun with the film.

The young actors are all experienced actors, but still pleasantly unused faces. They all play very authentic and relaxed, which makes the movie keep its charm even in weaker moments. Surely, some of the jokes don't really want to ignite and some of the characters are a bit too clichéd. But all in all, director and cabaret artist Matthias Kutschmann has succeeded very well in transferring the essence of Goosen's wonderful short stories to the screen with his feature film debut. He has managed to stage many small moments in which you recognize yourself as a viewer - even if you would have preferred to suppress the memory of such often rather embarrassing moments from puberty.

"Radio Heimat" is perhaps not the most demanding German cinema film of the year. But he doesn't want to be. He wants his viewers to have fun, to remind them of their own youth and to simply drive everyday life out of the living room for 90 minutes. And that's exactly what this entertaining trip to the 80s is all about. Despite some small weaknesses there is therefore a very clear one: Absolutely worth seeing!

image + sound: The DVD captures the 80s feeling as well as the swinging sixties feeling very well in the flashbacks. This is especially true for the atmospheric colouring, which is supported by a good overall sharpness. The sound is especially pleasing because of the good tuning of the powerful soundtrack to the dialogues. Good!

Extras: Also the bonus material is quite entertaining. This applies both to the somewhat too short Making of (ca. 12:46 min.) and to the interesting and amusing set with director Matthias Kutschmann (ca. 10:18 min.). In addition still Outtakes of the open air bath scene come (approx. 1:21 min.), from the Schrebergarten (approx. 0:25 min.), from teacher Heckers hair style (approx. 0:19 min.), as well as mini impressions of the fun at the set (approx. 0:22 min.). Rather negligible are the mini clips about the hairstyles (approx. 0:32 min.), the styling school of the 80s (approx. 1:02 min.) and the 80s game (approx. 2:41 min.). The view of the recordings of the soundtrack (approx. 5:16 min.) is much more worth seeing. Gut!

Fazit: "Radio Heimat" is a funny, nostalgic and very lifelike journey back to the 80s. There are some small weaknesses in the script and the staging, but overall the film can score with a lot of Ruhrpott-charme and 80s flair. The DVD transports the very special look of the film very well into the home cinema and can also please with some nice extras. That's what it's all about: absolutely recommended!