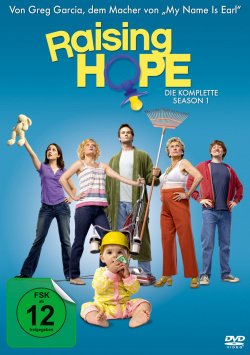 Content: The life of 23-year-old Jimmy Chance (Lucas Neff) is not really exciting. He still lives with his parents Virginia (Martha Plimpton) and Burt (Garret Dillahunt), with whom he also works as a pool cleaner and gardener. Jimmy isn't really lucky with the women either, which is why he is even more happy about the fact that one evening attractive Lucy (Bijou Phillips) jumps into his car and spends a passionate night with him. Too stupid only that Lucy proves to be a crazy killer, who is caught by the police a short time later and sentenced to death. Shortly before her execution a few months later, Jimmy asks her to visit her in prison. There he learns that their night together has not remained without consequences. And so he has to take care of his little daughter Hope from now on. Of course Jimmy is completely overwhelmed with this task. But with the help of his parents, who try everything to reduce the chaos in the Chase house to a minimum, he wants to manage to become a good father for the little one. But since his dementia-suffering grandmother Maw Maw (Cloris Leachman) isn't exactly easy to care for either and he also falls in love with supermarket cashier Sabrina (Shannon Woodward), it's more than questionable after only a few days whether Jimmy is really up to the role as father.

With "Raising Hope", Greg Garcia presented the successor to his comedy series "My Name is Earl", which was discontinued in 2009, in 2010. Garcia's very special handwriting is also clearly recognizable here from the very first moment. His new series also takes place in the "White Trash" milieu again and is filled with characters who are completely dysfunctional and not really richly endowed with intelligence, but who are really good and adorable in their hearts. And also the humor is like in "Earl" sometimes bizarre, sometimes pure slapstick, a bit rough and yet very cordial.

At the beginning this tone still seems to be a little bit stressful. It almost seems as if Garcia tried too hard to offer the fans of his old series something similar and yet somehow completely different, with which a new audience can also be won. It's only after a few episodes, when other supporting characters gain in importance, that the series finds its very own, very charming character. Although by far not every gag hits the mark, "Raising Hope" offers damn funny entertainment, which also works really well thanks to the likeable cast.

Alongside newcomer Lucas Neff, 80s teen star Martha Plimpton ("The Goonies") as a very direct Mama Virginia, Oscar winner Cloris Leachman ("The Last Show")) as demented Maw Maw and Garret Dillahunt ("Deadwood", "Last House on the left"), who is more of a villian, for the fact that the family Chance quickly grows to the heart of the viewer despite its many quirks. But also the supporting actors like the charming Shannon Woodward, and prominent guest stars like "Earl"-star Jason Lee as an aging rocker, make the comedy absolutely worth seeing even in the weaker moments.

Whether trying to take a family photo, a very special Thanksgiving dinner with the parents of killer Lucy or unveiling long hidden family secrets, the chances never get boring. If you liked the humour of series like "My Name is Earl" or "Malcolm mittendrin" you should not miss this entertaining first season of "Raising Hope". Worth seeing!

Picture + sound: The technical implementation of the series is on a good TV level. While the sharpness of the very clean image could have been a bit better in some scenes, the colors leave a very positive impression. The sound available in Dolby Digital 5.1 lets the dialogues come to the fore very powerfully, but the rather centrally mixed event hardly has any real surround moments to offer. But for a comedy series this is perfectly sufficient. In the end there will be a corresponding one: Good!

Extras: The first and third DVD contain some nice extras for fans of the series. It starts on Disc 1 with an audio commentary on the pilot with series creator Greg Garcia and his main actors Lucas Neff, Martha Plimpton and Garret Dillahunt. You can also watch an alternative version of the pilot here (in English with UT).

The rest of the bonus material is on Disc 3. In addition to a version of the season finale (in English with UT) extended by about four minutes, there are two short documentaries about the actresses of Baby Hope (about 6 minutes) and about the best moments of Virginia Chance (about 4 minutes). A look at the shooting of the season finale (approx. 11 min.) with a mixture of interviews, behind-the-scenes footage and excerpts from the final episode offers a quite good insight into the creation process of the series. A few amusing outtakes (approx. 5 min.), as well as several edited and extended scenes (approx. 19 min.) round off the neat additional offer.

Fazit: With "Raising Hope" series creator Greg Garcia has created a worthy successor to his comedy series "My Name is Earl". The characters are similarly dysfunctional and the humor is comparably weird, even though the series is a bit too tense at the beginning and tries to be disrespectful, before after some episodes it finds its very own, really funny tone. The 3-DVD set presents the 22 episodes of the first season in decent TV quality and also offers all fans some amusing extras. Those who have loved Earl will also be able to have a good time with the Chance family. Recommended