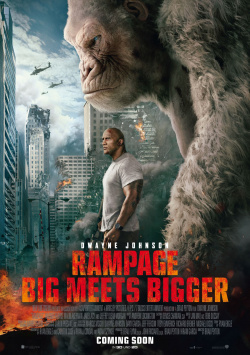 Primate researcher Davis Okoye (Dwayne Johnson) saved albino silverback gorilla George from brutal poachers a few years ago. Since then the two have been united by a friendship that is closer than most of the relationships Davis has with his fellow men. But then George is infected with the virus of an illegal gene experiment and suddenly the loving gorilla turns into a huge, violent monster. But that's not all: other animals have also been infected and are also mutated. They are now destroying their environment, while Davis and geneticist Kate Caldwell (Naomie Harris) are desperately trying to find an antidote. But the time he has left to save George becomes more and more limited with each attack of the furious mutations that inexorably approach the metropolis of Chicago.Rampage - Big meets Bigger" is the third collaboration between megastar Dwayne Johnson and director Brady Peyton after "San Andreas" and "The Journey to the Mysterious Island". In the film version of the classic Atari game "Rampage" the two are back in their element - Johnson as action hero with muscles and heart and Peyton as conductor of spectacular destruction orgies. Like in "San Andreas" this looks great and actually has some nice wow effects to offer. But dramaturgically the whole thing is again total Grütze in this case.

The characters are changing clichés, which provide unintentionally funny moments through one-dimensional character drawing and incredibly stupid dialogues. Surely, just Malin Akerman is to be noted that she had fun to play a completely overdrawn upper beast. But even if you don't take the whole thing too seriously, you have to twist your eyes more than once, annoyed, when moral speeches about the bad things in people are made or when completely infantile humour is used.

The film is surprisingly honest in the scene where Davis - and with it the audience - sees the mutated crocodile for the first time. His comment "Das ist ja jetzt mal richtig Schei…" is set by the really stupid looking monster amusingly ambiguous. The effects themselves are very successful, only the design of the mutations leaves something to be desired. Sometimes the whole thing seems a little trashy despite the excellent details.

"Rampage - Big meets Bigger" is still very entertaining in its own way. However, there are also some tough moments and the last act in which the three mutations haunt Chicago is quite tiring in the long run. Fans of Dwayne Johnson and very simple monster action will get their money's worth here. But those who are more afraid of clichés and flat dialogues than of huge mutant crocodiles should rather buy a ticket for another movie. Worth seeing with some concessions!