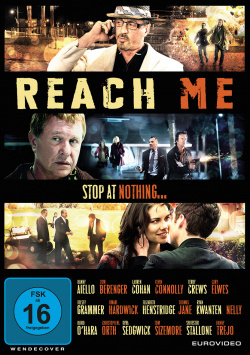 Reach Me - Stop at Nothing - DVD

Film: The book is the sensation par excellence: The guide "Reach Me" becomes a bestseller and inspires the most diverse people throughout the country, from a rapper (Nelly) dreaming of a new beginning to a trigger-happy cop (Thomas Jane) to a woman just released from prison (Kyra Sedgwick) who sees a soul mate in the author. But who is the man who wrote this self-help guide and who, despite its success, keeps himself completely out of the public eye? This is what Gerald (Sylvester Stallone) wants to find out for his online news page. He commissions his best journalist Roger (Kevin Connolly) to find the mysterious Teddy Raymonds (Tom Berenger). The search for the ex-football coach has many surprises in store for the disillusioned Roger. And when he actually finds Raymonds, the events start to roll over...

"Reach Me - Stop at Nothing" is a top-class ensemble drama that starts from an interesting premise. The search for the author of a book that has strongly influenced the lives of different people holds a lot of potential for suspense and entertainment. The idea of showing how such a guidebook can give a new direction to many a life that has gone out of control is in itself a very stirring foundation. If a high-calibre ensemble of cinema, TV and music stars can be engaged to play even the smallest supporting roles, nothing should go wrong anymore.

However, unfortunately director and screenwriter John Herzfeld ("2 Days in L.A.", "15 Minutes of Fame") has only really exhausted the full potential of the story in a few of the numerous plot strands. The rest of the film meanders too much between drama and satire and only seldom manages to really captivate. There are actually some very strong moments, but in too many scenes the script gets lost in meaningless dialogues, performed by characters that are drawn too clichéd, for the viewer to really get carried away. The many prominent faces don't help much.

Another problem doesn't necessarily concern the movie itself, but the German dubbing. For them - as for the film itself - there was apparently only a very small budget, so that the usual actors' speakers had to be dispensed with. Especially at Sylvester Stallone this is extremely negative. All in all, the dubbing seems a bit loveless and amateurish, which of course also applies to the movie itself. Therefore the choice of the English soundtrack is clearly to be preferred. The overall impression is much more positive.

"Reach Me - Stop at Nothing" is an ambitious film in which all participants did not participate because of the money. This has a positive impact. But the weak script and the somewhat unbalanced staging rob the indie drama of much of its effect. Anyone who likes American acting cinema and ensemble dramas can take a look here. But if you hope for a really profound plot and a fast-paced staging, you'll be disappointed, especially in view of the many good actors. But there is only one: worth seeing with some exceptions!

Picture + sound: The visual implementation on the DVD is not spectacular, but absolutely satisfactory. The picture is clean, the colour scheme is harmonious and the sharpness of detail is at a good level, especially in the bright moments. When it comes to sound, you can't expect a big sound firework from a quiet movie like this. However, the good mixing of the dialogues and the occasionally audible ambient noises provide a positive overall impression. Good!

Extras: Unfortunately, the DVD does not have any bonus material to offer.

Fazit: "Reach Me" is an ambitious ensemble film, which can come up with many great actors and a quite interesting story in its core. However, the realization is a little bit immature and offers some well done moments as well as a little bit irrelevance. The German dubbing seems to be a bit unkind and especially the more well-known actors lack the usual German voices. Technically, the DVD conversion is convincing, but unfortunately there is no bonus material. As an indie drama and American acting cinema certainly interesting, but not necessarily something for the broad mainstream taste.