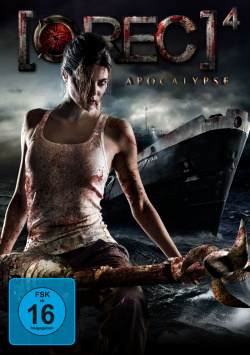 Film: After the cruel hours that the young reporter Ángela (Manuela Velsaco) spent in the house in Barcelona, where a zombie virus has infested her home, the members of a special unit manage to rescue the only survivor of the bloody massacre from the house before it is razed to the ground. When Ángela regains consciousness, she is on a quarantine ship on the high seas, far away from the civilization that is to be protected from the virus. But are the scientists on the ship really their saviours and is the virus really under control? Or is the danger for mankind still far from being averted?

After the third film, which is drifting completely into absurd horror comedy towards the end, director Jaume Balagueró returns to the original story in "[rec 4] - Apocalypse". The event directly follows the end of part 2. In the course of the movie there are also references to "[rec 3]", but you don't have to see this part of the series to be able to follow the events in the final (?) chapter. The first two films, on the other hand, should be seen in order to be able to understand all the connections at the end. However, knowledge of the first "[rec]" films also brings with it a decisive disadvantage: one inevitably compares the "apocalypse" with its predecessors. And there this part is a bit worse than the first two movies.

It has to be said that Balagueró hasn't tried desperately to transfer the style of the predecessors to a new location. If already part 3 was only a pure Found Footage film in the first half, part 4 says goodbye almost completely to this format after only a few minutes. As soon as the familiar surroundings of the infected house are abandoned, the film turns into a rather classic horror flick that rarely attempts elements of the currently overused found footage subgenre. It may be that "[rec 4] - Apocalypse" seems more conventional than its predecessors. The detachment from the previous format is not only dramaturgically meaningful, but also allows a good use of the very atmospheric action space.

While after the successful intro quite little happens and the action splashes a little during the next thirty minutes, the film really turns up in the second half. Here the story has to offer some very good moments of tension and quite rough splatter interludes, which are cut so fast that the FSK 16 release is quite appropriate. The claustrophobic intensity of the first film is rarely reached in the dark corridors of the floating quarantine station. Genre fans are always offered atmospheric horror with a decent entertainment value here.

Should "[rec 4] - Apocalypse" actually be the last part of the series, you can definitely speak of a successful ending here. Although the end is open enough for a potential sequel, Ángelas story has just been satisfactorily completed. It may be that Jaume Balagueró did not succeed in making the big litter and that this part will never reach the cult status of the original. But the entertainment value, despite some dramatic weaknesses, is at a level high enough to offer fans of the 90 series entertaining, fun and exciting minutes. And there's a very clear one at the end: Worth seeing!

Picture + sound: The picture on the DVD has a high picture sharpness, which shows only slight quality losses even in the numerous darker scenes. The slightly reduced colour scheme is atmospheric and the contrasts are well balanced. The Dolby Digital 5.1 Mix is pleasantly lively and transports not only the dialogues, but also the numerous small and large sound effects from the loudspeakers in an atmospheric way. Good!

Extras: As a bonus there's not only the trailer, but also a worth seeing Making of (approx. 26:25 min.), which gives a pleasantly ad-free view of the production. Not much, but good!

Fazit: "[rec 4]" says goodbye almost completely to the Found Footage style of the first parts. Director Jaume Balagueró has the final (?) ending of the story as a rather classic horror food with some very well done moments of tension and a gripping atmosphere, that doesn't quite come close to the original, though. Nevertheless, it's a worthy part of the series, that qualitatively picks up speed again after the rather over-twisted and humorous third movie. The DVD presents the film in good picture and sound quality and also the making of contained in the bonus material is definitely worth seeing. But there is one more than satisfied: Recommendable!