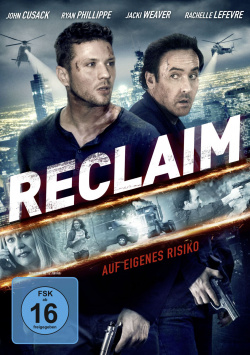 Reclaim - At your own risk - DVD

Film: For the young couple Steven (Ryan Phillippe) and Shannon (Rachelle Lefevre) there is only one big wish: they want a child - a wish they can no longer fulfill themselves after a tragic accident. In Puerto Rico they want to adopt the Haitian orphan girl Nina (Briana Ray) with the help of an agency. Everything seems to be going according to plan. Steven and Shannon are even allowed to bring Nina to their hotel and just have to wait for the girl's passport, which will be delivered in the next few days. But then the incomprehensible happens: Nina is kidnapped from the hotel. And also the adoption agency suddenly no longer exists. Where's Nina? What do the kidnappers want? And what role does the opaque Benjamin (John Cusack), whom the couple got to know during the last days, play?

Inspired by true events, director Alan White tells in "Reclaim - At Your Own Risk" a story that is very exciting in its core and which - at least so the short text panels before the credits suggest - is also supposed to draw attention to grievances. But even though the intentions are very commendable, the end result is "only" a very conventional thriller with one-dimensional characters, predictable twists and an extremely constructed dramaturgy. Does that make the movie equally bad? No, but this prevents the film from gaining a special autonomy that would make it stand out from the crowd of similar direct-to-video thrillers.

Some atmospheric shots of Puerto Rico, combined with some well-represented moments of tension, console us over some of the staged weaknesses. However, even fast-paced chases or atmospheric pictures can't hide the fact that the script isn't particularly good. The actors try hard to play against it, but only John Cusack can really convince. However, the actor, who lately seems to be fixed on the role of the villain in low budget thrillers, also sells himself a bit under value here again. Nevertheless: All in all, the actors leave an absolutely positive impression compared to what the script allows.

Thus "Reclaim - At Your Own Risk" isn't an outstanding one, but still a decent thriller, that could have gotten a lot more out of its subject. If you don't expect more than predictable, yet entertaining entertainment with an exciting and fast-paced last act, you can take a look here. Worth seeing with small prints!

Picture + Sound: The DVD image is dominated by very warm, earthy tones. The image sharpness is very good over long stretches, but here and there there there are minor weaknesses in the detail display and slightly blurred shots. Nevertheless, the positive overall impression prevails in the end, which also applies to the Dolby Digital 5.1 mix. While the dialogues are mixed very centrally, good surround effects ensure a pleasant dynamic especially in the last third. Good!

Extras: As a bonus the DVD has a look behind the scenes (about 16:27 min.), as well as a promo featurette, which is actually only a longer trailer (about 2:58 min.), to offer. Unfortunately, there are no subtitle options for either extras.

Fazit: "Reclaim - At Your Own Risk" is a decent thriller that comforts the numerous clichés and a certain predictability with an exciting story and an atmospheric visual language. Even though John Cusack once again sold himself below value and the topic deserved some more depth, the entertainment value of the movie is on a good level. The DVD is technically satisfactorily implemented. The bonus material is scarce and not more than the usual standard, but the look behind the scenes is not uninteresting at times. Altogether with some compromises still: Recommendable!