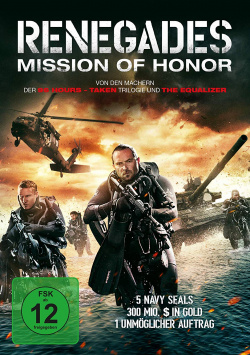 Film: Sarajevo in 1995: Actually the US-Navy SEAL unit of Matt Barnes (Sullivan Stapleton) is stationed in former Yugoslavia to hunt war criminals on behalf of Nato. But after a completely out of control operation the men are to be pulled off. But then they hear from the local Lara (Sylvia Hoecks), who has a secret affair with Matt's Kammeraden Stanton (Charlie Bewley), about a lost treasure of gold that has been lying at the bottom of the nearby lake since the Second World War. The men are supposed to help her recover the million-dollar treasure - but they're not the only ones looking for the gold…

Hidden behind "Renegades - Mission of Honor" may be a very prominent name, as star director Luc Besson is responsible for script and production. Nevertheless, it was a small wonder that this B-movie made it onto the big screen. The action is pretty good and especially the underwater set is really impressive. It's just a shame that apparently the whole budget was spent on it, because there isn't much left for the script. There is no other way to explain the terrible dialogues, which alternate beautifully with stale clichés on a regular basis.

The production looks as if it somehow got stuck in the 80s. You'd expect Michael Dudikoff to turn the corner at any moment - if you've grown up with the typical mercenary action films that flooded video stores in the 80s and 90s, you'll know what I mean after just a few minutes. That may have a certain charm, but in the end it's the same as the action and the set: the bad script and the actors' performances, which aren't exactly Oscar-worthy, destroy any potential for a really good action hit.

However, it also has to be said that the movie is much better at home theater and delivers quite some good stuff for an entertaining men's evening. At least there are some scenes in which "Renegades - Mission of Honor" works really well and can even entertain us properly. The bottom line is solid B-goods that are easily consumed, but are also quickly forgotten again.

Picture + sound: The picture can convince with a solid overall sharpness, especially with brighter outdoor shots. With the many night and underwater shots, however, some details are lost. The colours are harmonious and the contrasts are also mixed satisfactorily. The sound is available in a powerful Dolby Digital 5.1 mix, which scores particularly well in action scenes with proper surround moments. Good.

Extras: The bonus material is comparatively lean. Besides the trailer there are two short promo-features about the story (ca. 8:40 min.) and its realization, as well as about the scenery (ca. 7:13 min.). Especially the latter short documentary is really worth seeing. The trailer completes the clearly arranged additional offer.

Fazit: "Renegades - Mission of Honor" isn't really great cinema, but solid B-movie entertainment, which has a lot of weaknesses and clichés, but which also offers some decent viewing values and entertaining action sequences. The DVD is technically well done, the bonus material is short, but worth seeing. All in all there is one for it: Recommended!