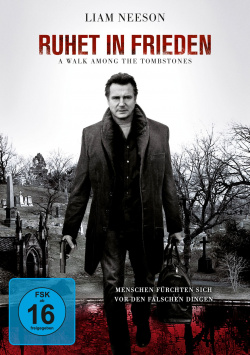 Rest in Peace - A Walk among the Tombstones - DVD

Film: New York, 1999: Matthew Scudder (Liam Neeson) resigned from police service after a bloody operation eight years ago. Now he lives very secluded and earns his living as a private investigator. When the dealer Kenny Kristo (Dan Stevens) commissions him to find his wife's killers, Scudder initially rejects the very lucrative offer. Because he knows he'd be putting her at the mercy of certain death. But when Kristo tells the ex-cop how brutal the perpetrators were and he plays him a tape recording of the murder, Scudder starts the investigation. It soon becomes clear that the kidnapping and murder of Kristos' wife was not an isolated incident and that a whole series of brutal crimes seems to have been committed by the perpetrators. Scudder wants to put an end to this at all costs. But for that he must act outside the limits of the law himself...

Since the great success of the "Taken" series, Liam Neeson seems to be subscribed to the role of the lonely avenger and fighter for justice. Also in the film version of the novel "Endstation Friedhof" by Lawrence Block, Neeson moves on familiar terrain. Following the 1986 thriller "8 Million Ways to Die" starring Jeff Bridges, "Ruhet in Frieden - A Walk among Tombstones" is Block's second attempt to bring hero Scudder to the screen. Director Scott Frank ("The Rules of Violence") paints a very atmospheric picture of New York before the turn of the millennium, which can add tension to the more conventional story of revenge and vigilante justice.

However, in some too tenaciously staged moments this is lost again and again. The storyline around the young TJ (Brian "Astro" Bradley), for example, slows down the actually very exciting investigation work time and again, even though the friendship between the street boy and the ex-cop works out well on its own. In addition, some of the action elements are too predictable to create real tension. However, the atmospheric camera work works against that, which makes sure that even in the somewhat lengthy or dramaturgically weak moments there is never any real boredom.

Thanks to the good acting and the nerve-racking finale the movie can make up a lot of ground. Surely the wheel is not reinvented here. And Scott Frank hasn't exactly staged a milestone in the thriller genre either. However, if you like atmospherically gloomy crime food and appreciate solid Hollywood thrillers, you'll get another worth seeing proof of why Liam Neeson is currently one of the most sought-after action heroes of international cinema. Worth seeing!

Picture + Sound: The DVD image is clean, has an atmospheric color scheme and a high level of sharpness, which also reproduces small details well in the brighter scenes. At the beginning the Dolby Digital 5.1 mix is still quite reserved and dominated by the more centrally mixed dialogues. But in the course of the story, the action sequences also increase the successful surround moments, which, thanks to a powerful mix, provide pleasant movement in the tonal events. Good!

Extras: In addition to a commercial look behind the scenes (approx. 11:37 min.) and a featurette about the main character (approx. 6:10 min.), in which the author of the novel also has his say, the DVD also has the trailer, as well as eight interviews with the actors, the director and the producers (approx. 25:40 min.) to offer. All in all rather unspectacular promo material, which also offers some interesting details about the adaptation of the book and the shooting.

Fazit: "Ruhet in Frieden" is a solid thriller of the dark kind, that lives on its atmospheric staging, the good actors and an exciting story. Some dramaturgical lengths are quickly distorted. The DVD presents the film in good picture and sound quality. The bonus material is very promolastic, but not uninteresting. Altogether there is a more than deserved one for it: Recommended!