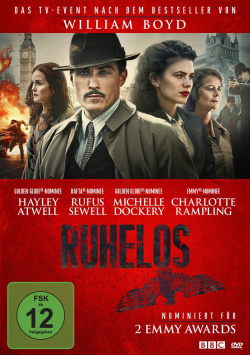 Contents: Student Ruth (Michelle Dockery) believes that her mother has finally fallen victim to senility when Sally (Charlotte Rampling) tells her that she is being persecuted, that her real name is Eva Delectorskaya and that she worked as a spy for the British secret service during the Second World War. But when Ruth reads her mother's notes of her young wife (Hayley Atwell) being recruited by the charismatic Lucas Romer (Rufus Sewell) and becoming a highly successful spy, her doubts increasingly give way to the certainty that her mother told the truth. And as Ruth dives deeper and deeper into the past, the present becomes more and more dangerous for herself. Because during the war Eva became the victim of an intrigue whose masterminds are still interested in gagging her...

"Restless" is a very exciting espionage thriller that takes place on two time levels. The framework story is set in the late 70s, while the main story takes place during the Second World War. The mixing of the two levels works quite well, although some elements of the story don't seem quite mature. So the little son of Ruth appears from time to time, only to disappear again without a trace. Even the short scene in which his German father, played by Alexander Fehling, appears is actually pointless for the actual story and seems to be owed only to Sat1's participation in the BBC production.

These are the moments that unnecessarily prolong the two-parter. The tension, which is built up excellently in the first 90 minutes, can therefore not last for the entire three hours. There are always highlights, such as Eva's deployment in Holland near the German border, which excuse for a few tough moments. But especially in the second part the lengths clearly increase and at the end it becomes clear that a shorter running time of about 30 minutes would have done the movie a lot of good. No question about it, especially for a TV production "Ruhelos" is really very well done and has a first class cast. Especially Hayley Atwell ("Captain America") and Charlotte Rampling, but also Michael Gambon ("Harry Potter") deliver first-class work. And also the visual realization is convincing, even if it can't quite keep up with big cinema productions.

If you like exciting political thrillers and espionage stories, you can take a look. Even though the movie's weaknesses are very clear, the strengths of the first part are enough to provide the viewer with entertaining and thrilling entertainment. But those who hope to be offered pure high voltage until the end will probably only be able to get enthusiastic about this two-parter to a limited extent. Nevertheless, the bottom line is still a satisfied one: worth seeing!

Picture + sound: The film shows that this is a TV production and not an expensive movie. Here and there there there are minor weaknesses in the detail sharpness and in the contrast, which leads to some moments appearing slightly blurred. Otherwise, however, the clean image is pleasing due to very powerful colors and a convincing overall sharpness. The sound has some good surround effects to offer, but could be a bit more lively in the tension moments. The dialogues are mixed in a way that is easy to understand and the music is harmoniously tuned to the events. Good!

Extras: The DVD has no bonus material to offer.

Fazit: "Restless" is a first-class espionage thriller, but its suspense is slowed down by some clear lengths and a few unnecessary subplots. A somewhat tighter narrative style would have done the three-hour TV two-part a lot of good. But the good performances of Hayley Atwell and Charlotte Rampling, as well as some very good moments of tension, especially in the first part, make the filming of William Boyd's bestseller absolutely worth seeing despite some minor weaknesses.