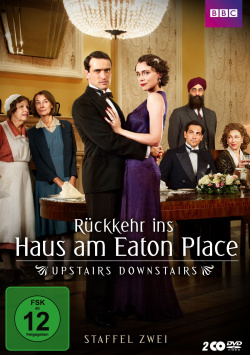 Film: Dark clouds hang over the house at Eaton Place. Lady Holland has died, Miss Buck, the long-time housemaid, has been admitted to the sanatorium with tuberculosis, and Lady Persie (Claire Foy) still vehemently refuses to leave Germany, although tensions between the Nazi regime and England are increasing more and more. The only ray of hope is the birth of the second child of Lady Agnes (Keeley Hawes) and Sir Hallam (Ed Stoppard). But the marriage of the two stands on ever more wobbly legs. Too much Hallam cares about his diplomatic career, while Lady Agnes feels more and more abandoned. And tensions are also growing among the staff. So there is a break between Mister Pritchard (Adrian Scarborough) and Mrs. Thackeray (Anne Reid), whereupon the resolute cook quits her job. But all this is just the beginning of a stirring, gloomy and difficult time for the residents and employees in the Eaton Place house - a time after which nothing will ever be the same again...

After a very short first season, "Return to the Eaton Place House" with six new episodes goes into the second and final season. The continuation of the 70's series classic "Das Haus am Eaton Place" already in the first episodes did not necessarily sparkle pure worldly romanticism. But the paths that are followed in the final episodes are even darker and sometimes quite heavy. In addition to all the fear, uncertainty and tension that the imminent war brings with it, the protagonists also have to cope with all kinds of personal strokes of fate.

abortion, adultery, betrayal, alcohol addiction, death - these are some of the central themes of the second season. There are always small moments of happiness, for example when Mrs. Thackeray gets to meet her little grandson or when Pritchard finally falls in love. But every moment of happiness is quickly followed by bitter despair or great sadness. It almost seems as if the makers have tried with all their might to give the series more depth and also to stand out more clearly from "Downton Abbey", to which the comparisons almost impose themselves. But unfortunately this is at the expense of the charm that made the original series so popular.

No question, "Return to the house at Eaton Place" is not a bad series. Equipment, dialogues and the performance of the actors are consistently convincing. But if the first episodes had to offer a little bit of encouraging lightness, the viewer is more and more overwhelmed by the omnipresent darkness. Thus the series takes a direction from which even the inventor of the original and actress of Miss Buck, Jean Marsh, has distanced herself to such an extent that she was no longer involved in the second season - neither in front of nor behind the camera. In fact, the sound of the series needs getting used to. Still, it's worth getting involved. Even though these six episodes are not very light food, they are worth seeing and entertaining in their very own way. Therefore, if you liked the first season and can accept the somewhat dreary tone of the stories, you shouldn't miss these final episodes!

Picture + Sound: The great work that was done here on the equipment, costumes and set design is shown to advantage on the DVD thanks to a good picture sharpness and a harmonious colour scheme. The picture quality rarely exceeds a good TV level. However, since the events take place primarily in the house at Eaton Place anyway, this is perfectly sufficient. The same applies to the sound. There are a few minor moments when the surround channels are used in each episode. But first and foremost the quite frontally mixed dialogues and the reserved film music play the main role. A big sound firework should therefore not be expected. Good!

Extras: Unfortunately the DVD does not have any bonus material to offer.

Fazit: "Return to the House at Eaton Place" is a high-quality BBC series, which tries to stand out from other successes like "Downton Abbey" by dealing intensively with much more difficult topics. What in the first season still produced a quite balanced picture, in the episodes of the second season the mood of the spectators is always clearly in the cellar. You have to get involved with that, which is made relatively easy by the good actors and the excellent equipment. But this "return to the house at Eaton Place" on this gloomy path will certainly never attain the cult status of its legendary predecessor series. Nevertheless: if you liked the first season and generally have a weakness for historical BBC productions, you shouldn't miss these six episodes. Recommended!