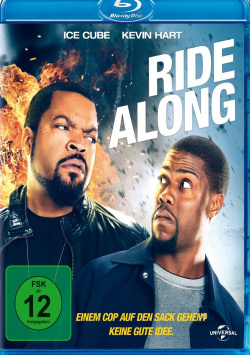 Film: Ben Barber (Kevin Hart) would love to be a real cop. Then James (Ice Cube), the brother of his girlfriend Angela (Tika Sumpter), would finally respect him. And then nothing stands in the way of a wedding. It's just too bad that the school security guard has a pretty big mouth, but otherwise doesn't necessarily have the best prerequisites for the tough job as a cop. When Ben is nevertheless accepted at the police academy, he sees his big chance and asks James to give him his blessing for marrying Angela. But James doesn't know which idea is worse: to have to call Ben his brother-in-law or to know the full-blown idiot armed in the police service on the streets. He knows he's got to get Ben out of trouble. And that's only possible if he shows him what everyday life as a cop really looks like. And so he invites Ben to accompany him on patrol for one day. The plan seems to work out, because the first joint mission almost ends in a catastrophe. But it's not that easy to intimidate Ben. And when the unequal duo suddenly have to deal with the most dangerous gangster of Atlanta, the day together takes an unexpected turn...

With "Ride Along" director Tim Story has landed a real surprise hit in the USA. And this despite the fact that the comedy hardly radiates a spark of originality. The story evokes strong memories of the typical Buddy-Cop comedies of the 80s, Ice Cube shows the same annoyed facial expression that he used for "Are we already there?" and Kevin Hart is as always - Kevin Hart. Kevin Hart has long been a star in the USA, where he is also very successful as a stand-up comedian. In this country one knows many of his movies like "Scary Movie 3 + 4", "Almost Married" or "Two of the Old Strike", but his name is only known to a few. Whether this will change in this country with "Ride Along" is questionable. Because even though the action comedy has what it takes to be a hit, the story and the actors are just too interchangeable to leave a lasting impression.

Admittedly, the cabbage between the grouchy James and the nag Ben is already very funny and especially in the last act the movie has some good action and tension moments to offer. And Laurence Fishburne also cuts a really good figure as an ice-cold villain. But like Ben in his first attempts at the shooting range, the script never really hits the mark. As good as the pacing of the production may be, the stenciled characters, the rather thin story and the not very clever dialogues always take the wind out of the sails. The fact that comparisons with much better genre representatives like the "Rush Hour" films, "Only 48 Hours" or the "Lethal Weapon" series are virtually inevitable in many scenes further highlights the weaknesses of "Ride Along".

Sure, there are many Buddy Cop movies that are far less entertaining and have even flatter gags to offer. "National Security" with Martin Lawrence or "Detroit City" with Pat Morita and the later Late Night King Jay Leno, for example, really don't belong to the pearls of this popular genre. But just because Tim Story already showed with "Barbershop" and even with the rather weak "Dank wie ein Mann" that he has a talent for comedic timing and that he implemented the action in his "Fantastic Four" movies in an appealing way, the weak implementation of "Ride Along" is all the more disappointing.

If you just want to have fun and like simple knitted action comedies according to scheme F, these weaknesses won't really bother you. After all, the film works really well as a simple entertainment to switch off the brain. But if you don't just expect an entertaining action-fun, but also really good jokes and a not completely predictable story, or if you are quickly annoyed by the constantly chattering Kevin Hart, you will soon lose the laughter. And that's why there's only one: worth seeing with small restrictions!

Picture + sound: If there's something you can't complain about in "Ride Along", it's undoubtedly the technical implementation of the film on Blu-ray. The picture is absolutely clean and the overall sharpness is especially in the bright moments on a very good level. The colours are powerfully mixed and the contrasts also leave a positive impression. At the beginning, the sound is not primarily determined by the dialogues and the music, but towards the end, more and more fast-paced action scenes ensure a really good utilization of the surround channels. Good!

Extras: Besides a much weaker alternative end (approx. 1:42 min.) the disc also has six distant scenes (approx. 8:23 min.), an amusing alternative recording (approx. 1:38 min.) and a funny gag reel (approx. 2:59 min.). In addition there is a featurette about the good chemistry between the two main actors (ca. 5:16 min.), a very interesting look at the shooting of the most explosive scene of the movie (ca. 4:50 min.), as well as another short documentary about the action in the movie (ca. 5:08 min.). Gut!

Fazit: "Ride Along" neither particularly original, nor really funny. But if you just want to enjoy good action entertainment with classic buddy cop flair, this hit movie will get your money's worth. The Blu-ray presents the film in good picture and sound quality and also has some good extras on board. If you want to sweeten the waiting time for the sequel announced for 2016, you can't avoid this disc. For fans absolutely recommendable!