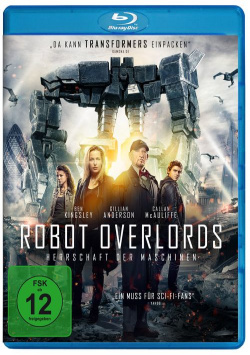 Content: Three years ago, an invasion of alien robots hit the earth. The war lasted only a few days, as extraterrestrial technology was vastly superior to the technology we humans had. Since then, people have been living in a kind of permanent house arrest. The robots have promised that she only wants to study the earth and its inhabitants. After that, they would leave our planet again. There's only one rule everyone has to abide by: Nobody is allowed to leave his house, otherwise the current execution will follow. With the help of electronic implants and some collaborators, people are monitored around the clock. For Sean (Callan McAuliffe) this house arrest is particularly bad. Because from the house of his mother Kate (Gillian Anderson), in which he is trapped with three other youths, he cannot search for his father. He's dead, but Sean's convinced this is a lie. When the children accidentally deactivate one of the implants while playing, a way is found to leave the house without being killed by the robots. And so Sean and his friends embark on a dangerous search for Sean's father, where the treacherous Robin Smythe (Ben Kingsley), who wants to prevent the children from finding out the truth in any case...

After his wonderfully weird horror comedy "Grabbers" director Jon Wright takes it much more seriously in "Robot Overlords". This has some advantages, but unfortunately also some disadvantages. The most obvious advantage is the engaging end-time atmosphere, which fully lives up to the story. With quite modest means, Wright and his team have visually created a convincing dystopia that presents the theme of alien invasion as a fast-paced youth adventure. With Ben Kingsley and Gillian "Akte X" Anderson, the film also features two very good actors, who can usually get the best out of weak scripts.

There are several scenes that reveal a high tension potential, appealing effects and an engaging atmosphere, especially for younger viewers. For older SciFi fans, on the other hand, this fight against the overpowering robots is a bit tough and too good. In addition, the script has to struggle with two major problems: on the one hand, it just uses too many worn out clichés too often, whereby a certain element of surprise simply gets lost. On the other hand, the movie lacks what made "Grabbers" so entertaining and charming: a lot of tongue-in-cheek self-irony. Admittedly, the search of a boy for his father in a society destroyed and subjugated by aliens is of course no material for the big laughs. But a little more humour would have done the production good just in response to the many clichés. So the involuntary comedy could easily have been transformed into a deliberate loosening of the mind by using targeted irony.

So "Robot Overlords" unfortunately leaves a lot of potential unused. As an exciting youth adventure, however, the whole thing always works. Viewers between 12 and 19 years, who like exciting SciFi-dystopias and don't place too much value on sophisticated dialogues, interesting characters and logic, are well served here. And for such viewers there is also a clear one: Worth seeing!

Picture + sound: The picture is quite dark in some scenes, but also shows a good overall sharpness. Even though the small budget is also reflected in the visual implementation, the atmospheric colouring and the successful detail presentation leave a positive overall impression. The same applies to the DTS-HD Master Audio Mix, which offers some effective surround moments in addition to the powerfully mixed voices. Good!

Result: "Robot Overlords" is a rather entertaining sci-fi thriller, which has some good ideas and neat effects. Unfortunately, the script suffers from some very tough moments and disturbing clichés. But for an entertaining home cinema evening it's enough. The Blu-ray presents the film in atmospheric picture and sound quality. As a bonus there is a good making of and a look at the special effects. All this is enough at the end with small compromises for one: Recommendable!