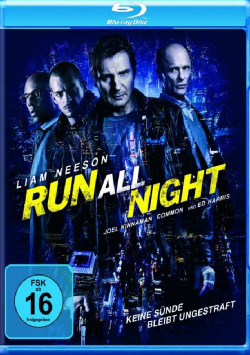 Film: The days when Jimmy Conlon (Liam Neeson) was on the road as an ice-cold contract killer are long gone. Now he's a broken man drowning the sins of his past in alcohol. His marriage has long since failed and his now grown-up son Mike (Joel Kinnaman) doesn't want anything to do with him. Only the close connection to the New York godfather Shawn Maguire (Ed Harris) has so far saved Jimmy from a total crash and from jail. But the friendship between the two men breaks up when Shawn's son Danny (Boyd Holbrook) kills two Albanian dealers and Mike, who watched him, tries to shoot him, which Jimmy prevents at the last moment. Now Danny's dead and Shawn swears revenge. He's not after Jimmy, he's after Mike and his family. To protect them, Jimmy has to fight a bloody chase through New York night with the police, Shawn's lackeys and an ice-cold hit man...

"Run All Night" is already the third collaboration of director Jaume Collet-Serra and lead actor Liam Neeson. After Neeson was rushed through Berlin by the Spanish director in "Unknown Identity" and he even had to take on bad boys in "Non-Stop", he has to prove himself as an action hero this time in New York. Dramaturgically the whole thing is certainly not a prime example of originality. But if the thriller is taken for what it wants to be, then "Run All Night" succeeds in offering its audience entertaining and exciting entertainment. Collet-Serra succeeds again and again in captivating the audience with wild camera movements, well implemented action scenes and effective tension elements. Even if the father-son conflict is brimming with clichés, the gripping atmosphere alone can easily counteract them.

Liam Neeson is able to return to absolute top form in the second half of the film. In the best "96 Hours" mode he can prove over and over again that he still cuts a damn good figure as an action hero at over 60. But also Ed Harris and Joel Kinnaman deliver absolutely solid performances. Only Vincent D'Onofrio falls far short of his possibilities, but this is primarily due to the fact that the script of his character the cop, who has been chasing Jimmy for years, offers little room for development. But even this is only slightly negative, as the focus of the movie is on the action anyway - and it can convince in almost every moment.

"Run All Night" won't get any prizes for originality, for high acting art, an intelligently thought-out dramaturgy or profound dialogues. But when it comes to entertainment, this thriller is a real high-flyer. Especially in comparison to the disappointing third part of "96 Hours", this fast-paced non-stop chase is really a very successful genre representative. If you like exciting popcorn cinema, don't mind some clichés and generally appreciate action films with Liam Neeson, you can safely run through New York at night. Absolutely worth seeing!

image + sound: The image of the Blu-ray captivates by a tidy image sharpness, which also lets many smaller details come to the fore very well. The colouring is very atmospheric, dirt or other visible weaknesses are not recognizable. The slight blur, which can be seen in the many dark scenes, is a deliberately used stylistic device to underline the slightly dirty look of the film.

The sound shows its strengths especially in the action sequences. In addition to the well mixed dialogues, sound effects such as shots, explosions or squeaky car tires provide powerful movement in the multi-channel area. Good!

Extras: The great revelation does not offer the bonus offer. There are two short featurettes about the shooting (about 10:26 min.) and about main actor Liam Neeson (about 6:09 min.). Apart from that there are only a few unused and extended scenes (ca. 16:20 min.), which however have some quite interesting moments to offer.

Fazit: "Run All Night" is an atmospheric action thriller, which doesn't offer anything new dramaturgically, but can score with a very stylish visual language and a usual convincing Liam Neeson. The Blu-ray presents the film in appealing picture and sound quality. The bonus material turns out to be a bit meager, but overall it's well worth seeing. The bottom line is clear: Recommended!