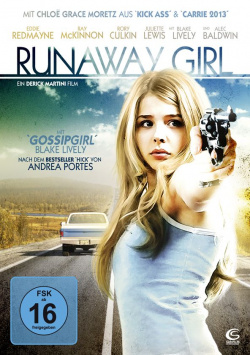 Film: After she had to celebrate her thirteenth birthday in a bar and had to watch her drunken parents get into each other's hair in the end, Luli McMullen (Chloë Grace Moretz) decides that the time has come for her to leave her home in Nebraska and try her luck in Las Vegas. Only with some clothes and the 45 Smith & Wessen revolver, which she got for her birthday, in her luggage, Luli sets off. Right from her first ride, the cowboy Eddie (Eddie Redmayne), she tells a wild story of lies about the reason for her journey. After the two separate after only a few miles, the girl is taken away by the drug addict Glenda (Blake Lively), who involves Luli in a gas station robbery. But this is only the beginning of a dramatic odyssey in the course of which Luli is not only confronted with the dark sides of life again and again. At the end she also has to realize that you can't run away from your own past...

"Runaway Girl" is a great cast drama, that can score with some very intense moments, a story that is interesting in its core and a promising beginning. Here director Derick Martini reveals an almost satirical undertone, which gradually disappears. If the movie still offers some dialogues or bizarre moments at the beginning, which you can smile about or even laugh at, drama and darkness take over at the latest with an attempted rape. The good actors, especially Chloë Grace Moretz ("Kick-Ass"), and also the stirring pictures of this adaptation of Andrea Portes' novel "Hick" ensure, at least at the beginning, that the weaknesses hardly play a significant role. Especially in the first 50 minutes "Runaway Girl" is a really well done, intensive coming-of-age movie, that reveals a lot of potential. But this is completely lost towards the end, when the story becomes more and more confused. In the last 30 minutes it becomes more and more difficult for the viewer to get carried away by the events and to keep up the interest for the fate of the characters.

Thus Derick Martini succeeded in creating a drama that unfortunately seems too undecided, which is worth seeing only because of the good acting performances. But the good potential, which the story reveals at the beginning and which is also recognizable in its craftsmanship, is lost in increasing confusion towards the end. Anyone who appreciates American independent cinema and can also get involved in somewhat bulkier arthouse dramas should take a look despite the weaknesses in the last third!

image + sound: The very clean picture on the DVD convinces with an atmospheric colour scheme and good picture sharpness. This can be noticed especially in the brighter sequences even with smaller details, while there are small quality losses with dark scenes. The sound is largely determined by the dialogues and the music, but the surround channels are also used again and again. No audiovisual revelation, but more than fine for a small independent drama. Good!

Extras: As a bonus the DVD only has the trailer and further program tips to offer.

Fazit: "Runaway Girl" is a very well cast drama, which has some very intense moments to offer, but towards the end it gets a little bit confused. But the sometimes very strong actors and the captivating visual language are enough to make this road movie a favorite with lovers of American independent cinema. Recommended!