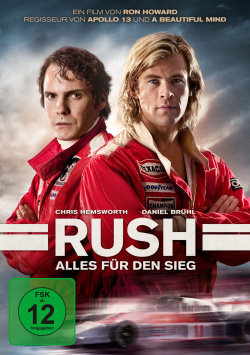 Rush - Everything for Victory - DVD

Film: The 1976 Formula 1 season was especially one: a bitter duel between two completely different racers. On one side the disciplined strategist Niki Lauda (Daniel Brühl), on the other the hot-headed playboy James Hunt (Chris Hemsworth). Since their first encounter, the two have been rivals who have enough respect for each other's performance to know how hard they must fight to be on the winners' podium at the end of the season. At the beginning Niki Lauda has the nose almost unassailable in front. But with the dramatic events during the race at the Nürburgring on August 1st, 1976 everything changes...

"Rush" seems at first sight to be primarily concerned with the Formula 1 circus and the tragic accident of Niki Lauda. If director Ron Howard ("Apollo 13", "Illuminati") had actually only concentrated on these aspects of the story, the movie could easily have become a failure, which rightly could have been accused of a certain sensationalism. But even though there are some great staged and extremely stirring race scenes and even though Lauda's accident is a key event, the dramaturgical treatment of the racing season of 1976 is essentially about the two very different characters and their long-standing rivalry.

The sophisticated script by Peter Morgan, who had already written the book for "Frost/Nixon" for Howard, the work of the Oscar-winning cameraman Anthony Dod Mantle ("Slumdog Millionaire") and the work of the "Slumdog Millionaire".), the soundtrack by Hans Zimmer and the shooting at original locations like the Nürburgring ensure that the audience is not only transported into history, but also into the glamorous 70s. But it wasn't just the team behind the camera that delivered first-class performance in this Zeitgeist portrait. The actors also deserve great praise, especially Daniel Brühl, who as Niki Lauda loosely plays his famous co-stars against the wall.

No question, Chris Hemsworth as cool playboy James Hunt is also perfectly cast and with the supporting actors such as Olivia Wilde, Christian McKay or Alexandra Maria Lara there is little to complain about. It is simply a great pleasure to watch this well-chosen ensemble. But none of them merges so convincingly with his role as Brühl succeeds here. Mimic, voice, body language - Daniel Brühl sums it all up here. His acting performance is the main reason, besides the script, why "Rush" can convince not only as a racing spectacle, but also as a gripping drama about the power of human will.

Ron Howard has delivered a very European-looking film, which rarely makes use of the pathos so popular in Hollywood and which instead relies on its dense dramaturgy and its convincing character drawing. It's a thrilling drama, which is peppered with a little bit of loosening up humor and some great racing scenes and thus offers perfect entertainment overall. Regardless of whether you are a Formula 1 fan or not, "Rush" is clearly worth seeing!

Picture + Sound: The picture on the DVD is kept in warm sepia tones, which further enhance the 70s feeling that was already established through the work of the costume and make-up artists, as well as through music and equipment. Sometimes the contrasts appear slightly exaggerated and the overall appearance slightly overstylised, which is also noticeable by the fact that the image sharpness is not always optimal. However, this can also be regarded as a deliberately used stylistic device, as the detailed display and the contrast blending are convincing overall. The sound is a lively Dolby Digital 5.1 mix, which provides a lot of dynamics in the surround area, especially for the racing scenes. Voices and music are well coordinated and sound powerful from the home cinema speakers. All this rich overall for a more than satisfied: Good!

Extras: The DVD has almost two hours of bonus material to offer. We start with ten featurettes, which together result in a quite comprehensive making of. The work of screenwriter Peter Morgan (ca. 3:50 min.), the search for the perfect actors for Niki Lauda and James Hunt (ca. 7:26 min.), the work at a shooting location in London, which has changed into different racetracks all over the world (ca. 1:47 min.), the fashion and style of the 70s (ca. 5:38 min.), as well as the working method of Ron Howard (ca. 7:05 min.) are thematized. In addition, the shooting of the Formula 1 scenes (approx. 4:56 min.), the true background around the rivalry between Lauda and Hunt (approx. 8:48 min.), the cars in the film (approx. 5:07 min.), the Formula 1 "Rock and Roll Circus" (approx. 4 min.), as well as the women of the drivers (approx. 2:29 min.) will be examined in more detail. All these short documentaries have a clear promo character, but offer a lot of interesting information and a worth seeing look behind the scenes.

Fazit: "Rush" is not only a great Formula 1 film, but also a drama enriched with a little humour, which can inspire with great actors - above all Daniel Brühl - a dense dramaturgy, gripping racing scenes and a convincing character drawing. On the DVD, the film presents itself in good picture and sound quality and also has almost two hours of bonus material to offer. But of course there is only one possible conclusion: Absolutely recommendable!