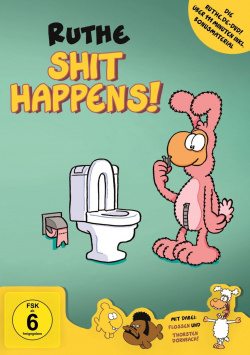 Content: Ralph Ruthe is undoubtedly one of the greats of the German comic scene. The author, musician, filmmaker and cartoonist, who earned his first spurs as a lyricist for "Käptn Blaubär" at a young age before working for ten years as an author and draughtsman for the German edition of MAD Magazine, has been thrilling millions of readers and Internet users with his numerous cartoons and animated films for quite some time. His series "Shit happens!", whether in magazines or in book form, enjoys enormous popularity and has received several awards. After his cartoons have been viewed almost 50 million times on YouTube and Ruthe was able to generate over 130,000 Facebook fans with his work, the time is finally ripe for a DVD with the best "Shit happens!" cartoons!

Almost two hours of material are offered to fans for less than 10 euros. You can see five clips of the popular "Flossen", five "Nachrichten" articles (e.g. from hell, via Facebook nudges or about the end of the world in 2012), advertising parodies including outtakes, four visits to the "HNO-WG" with outtakes to episode 3, three clips with Thorsten Dörnbach, two music videos, two parts of "Biber & Baum", two contributions on the topic "Christmas" as well as three further clips ("Faux Pas", "The SHIT HAPPENS Show" from 2007 and "10 film classics in 100 seconds").

Mal the completely self-directed clips offer great laughs, such as the delicious advertising parodies, Thorsten Dörnbach's "TV Total"-Casting or the cult HNO-WG, where giraffe Günni, rhino Jochen and Koala Krüger share an apartment. In other cases it is "only" enough to have an amusing smile or a light giggle. The animated films, in which Ralph Ruthe is responsible not only for the direction, but also for the voices and the music, are in a good mood, but all of them. A special highlight: the stars from "Flossen" present "10 film classics in 100 seconds" - simply wonderfully absurd and very, very funny.

When watching the DVD it quickly becomes clear why Ralph Ruthe's cartoons and clips are so popular. His ideas are original, his characters lovable and even if not every punch line is right there is something to laugh about in almost every clip. Whether it's the beaver's desperate attempts to fell the tree, satirical side blows on extremely annoying commercials, a desperate rhino desperate to lose two kilos, or a koala stuffing cushions into his ears, "Shit happens!" really offers the viewer the quintessence of what makes Ralph Ruthe and his creations so popular and successful. And even if fans already know the films from the Internet and have watched them there several times, this compilation on DVD is a clear must for them! Absolutely recommendable!

Picture + sound: There's hardly anything wrong with the technical implementation of the clips. The image is clean, the colours are very strong and the sharpness is on a good to very good level. The PCM stereo mix does not offer a great surround feeling, but the voices - and especially those of Thorsten Dörnbach - sound very powerful from the speakers. For a cartoon DVD all this is completely sufficient. Good!

Extras: Besides the clips already known from the internet, the DVD also has some nice extras to offer. For the second episode of "Biber & Baum" there is an interesting storyboard comparison and for the popular "Flossen" a look at first animation tests. Episode 3 of the "HNO-WG" gets an audio commentary of the artist himself and there are some outtakes to see for "Faux Pas". The intros to the live tours 2011/2012 and the bonus clip "Imageberater" with sheep Thorsten Dörnbach round off the additional offer.

Fazit: When Ralph Ruthe says "Shit happens!", then there is usually no reason to despair, but only a lot to laugh about! For almost two hours fans can now enjoy the best clips, which were previously only available on the Internet, in good picture and sound quality and supplemented with some nice extras on a DVD. Ruthe fans can't get past this DVD! absolutely recommended!