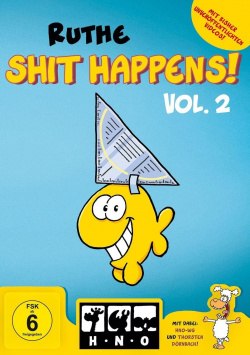 Content: Ralph Ruthe, one of the greats of the German comic scene, is successful not only as a cartoonist, but also as an author, musician and filmmaker. With cartoon clips, books or live tours, Ruthe has built up a very large fan base in recent years. The series "Shit happens!" alone is a real phenomenon with almost 50 million hits on YouTube. After a first collection of the best "Shit happens!" cartoons was successfully released on DVD about a year ago, the second prank is finally on.

And again, fans get a lot to laugh about for little money. In about 90 minutes there will be a reunion with the heroes of "Flossen", who present their creepy Halloween special. A visit to the popular "HNO-WG" is also a must, of course, and Rainer Calmund and the series "Lost" are among the target groups. In addition, there are lots of advertising parodies again, with some current clips (e.g. crossover commercials, where the m&ms stop by at TicTac or Leibnitz) as well as a special about the advertising of the 90s. In addition, Santa Claus has a staff meeting with a pubescent Rudolph, Brohmsen and Schwarz investigate the death of Stefan Raab and in the news Merkel, Obama or Putin get their fat away.

Musically there is also something else on offer. For example, there is a song with sheep Thorsten Dörnbach, a song with the fins or a parody of David Guetta. As already with the first DVD, hearty laughs and amused smiles alternate in beautiful regularity. There are also some gags that don't want to ignite properly, but they are clearly in the negligible minority. Because the bottom line is that the good mood dominates here, which is often served very directly, but sometimes also pleasantly hidden away. And that's why for the second collection of "Shit happens!" clips there's a clear one: Worth seeing!

Picture + sound: In contrast to the first DVD, nothing has changed in the audiovisual implementation of the clips in Vol. 2. The picture is clean, the colours are mixed very well and the sharpness is also on a good to very good level. The PCM stereo mix does not offer a great surround feeling, but the voices - and especially those of Thorsten Dörnbach - sound very powerful from the speakers. For a cartoon DVD all this is completely sufficient. Good!

Extras: Besides the clips already known from the internet, the DVD also has some nice extras to offer. We start with the intro-clip to Ruthes Live-Tour 2013 (ca. 2:38 min.) and the bonus-clip "Zettel" (ca. 1:04 min.), an early artefact of the artist. A telephone call between Ralph Ruthe and the draughtsman Joscha Sauer (approx. 3:50 min.) will give the audience a glimpse into the daily work of cartoonists. And finally there are some clips for the TV Total Christmas Show (approx. 2:34 min.), which were created under enormous time pressure, as well as a storyboard comparison to the HNO-WG episode (approx. 7:49 min.). Good!

Result: "Shit happens!" also makes for a really good mood at the second attempt. Almost 90 minutes of clips with the HNO-WG, the fins, advertising parodies and proll sheep Thorsten Dörnbach were tied up on this second DVD to an amusing package, which was also stuffed with some bonus material. For fans of Ralph Ruthe and his wonderful creations an absolute must!