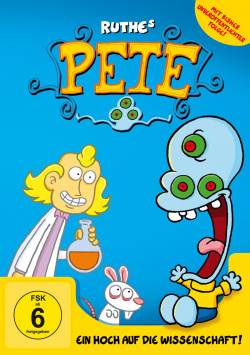 Content: Dr. Haubner is a brilliant scientist. Again and again he makes new inventions that could revolutionize our world. Whether teleportation, a remedy for baldness, help with cat allergies, a taste enhancer for chips or mind reading - there is nothing for which Dr. Haubner does not develop the right pill. But somebody has to test the inventions. But luckily the scientist has Pete. He likes to swallow every pill - true to the motto "Hurrah for science". But as a rule the ingenious inventions also have one or two undesirable side effects…

Besides the popular characters from the "Shit happens!" cartoons - such as the HNO-WG or the Schaft Thorsten Dörnbach - the three-eyed guinea pig Pete is undoubtedly one of the most popular characters of the author, musician, filmmaker and cartoonist Ralph Ruthe. The 16 episodes around the little blue proband with the haunting voice are full of bizarre ideas and weird jokes. When Pete travels to the Playboy villa or Atlantis thanks to a teleportation pill, when the craziest hairstyles grow, or when he uses a very special remedy for cat allergies, no eye stays dry.

Besides highlights like the wonderfully absurd Halloween episode (with guest speaker Oliver Kalkofe) there is also a new episode in which Pete has to struggle with hay fever. Even if most of the clips are already known to the fans, this compilation of the "Pete"-clips is definitely worth it. It quickly becomes clear why Ruthe and his creations enjoy such high popularity (which was impressively testified to at this year's Book Fair by the long queue at the publishing stand where he signed his books). Over 120 million views on YouTube, more than 420,000 YouTube subscribers and 840,000 Facebook fans, hundreds of thousands of books sold and the success of the "Shit happens!" DVDs speak for themselves. And that's why Dr. Haubner doesn't have to invent a pill for Pete fans to make this DVD another success for Ralph Ruthe. Worth seeing!

Picture + sound: There's hardly anything wrong with the technical implementation of the clips. The image is clean, the colours are very strong and the sharpness is on a good to very good level. The sound in a PCM stereo mix does not offer a great surround feeling, but the voices - and especially Pete's loud organ - sound very powerful from the speakers. For a cartoon DVD all this is completely sufficient. Good!

Extras: In addition to the clips already known from the Internet, the DVD also has a previously unreleased episode, a series in English ("Hooray for science!") and some funny outtakes to offer. In addition there are the trailers for the "Shit happens!" DVDs and a "Sondermann" promo from 2008. An amusing internet song rounds off the additional offer.

Fazit: Ralph Ruthes "Pete" is an absolute must for fans of this weird guinea pig. Besides 15 already known clips, there is also a new episode, an episode in English, outtakes and an internet song. The DVD is technically well realized, so that also here a positive overall impression is created. For this there is "Hurrah for science" - or in other words: recommendable!