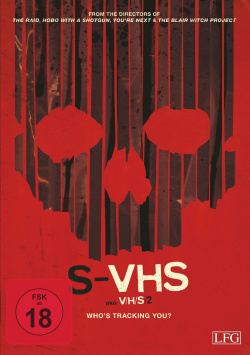 Contents: A private investigator is assigned to investigate the disappearance of a young man. Together with his assistant, he gains access to the man's house, where they find lots of screens and video cassettes. In a video recording, the disappeared man explains that he has found a real piece of jewellery in a collection of porn and snuff films, which is of inestimable value. And while the detective looks around the house for more tracks, his assistant is supposed to work her way through the videos to find that mysterious tape. But the films she discovers turn out to be quite real horrors, which do not remain without consequences for the viewer. An eyeball transplant with unexpectedly murderous consequences, a visit to a sect that only seems to love peace, a bicycle tour through the forest with a truly undead exit or even a video of siblings who get a very special visit while their parents are on their way - all this is found on the tapes in the apparently abandoned house. But as horrible as the videos are, the real horror takes place in front of the screen...

"S-VHS". is the sequel to the surprise hit "VHS", a horror short film anthology in which various directors have tried to win a new side to the found footage subgenre. The result was rather mixed, since a few really effective and successful contributions alternated with weaker, almost boring and rather exhausting episodes. The expectations of a sequel were therefore a little dampened by many genre fans. But already the list of filmmakers who gathered behind the camera for part 2 gave hope for a qualitative improvement. Besides Adam Wingard ("You're next"), who was already on board at part 1, this time also the "Blair Witch Project"-makers Gregg Hale and Eduardo Sanchez, "The Raid"-Mastermind Gareth Evans, Timo Tjahjanto ("Macabre") or Jason Eisener ("Hobo with a Shotgun") behind the camera.

However, the best directors are of little help if the episodes themselves are not convincing. But here too, "S-VHS" clearly beats its predecessor. Apart from small weaknesses, the stories are intense, exciting, bloody, surprising and extremely entertaining. While as in part 1 the framework story is rather weak, episodes like "Safe Haven" by Gareth Evans and Timo Tjahjanto offer disturbing horror food of the finest.

The whole thing is not only better, but also more bloody, than "VHS". And as a result, the FSK, which has still unabridgedly approved Part 1 with an 18th release, has refused to approve an uncut Part 2. The FSK 18 version available in Germany therefore had to be shortened by a few minutes. The advantage of the Found-Footage style is that the cuts only really stand out in one episode, because the cuts result in a content inconsistency. Otherwise, however, the cuts can be accepted in principle, since the short film collection is still extremely intensive even in this version. But for many genre fans, even the smallest cuts are a clear reason not to buy. So if you can't accept the cuts, you'll have to go for a much more expensive imported version.

Naturally, cuts are a nuisance for fans and film lovers in general. But apart from that, "S-VHS" is a really very good, relentless and extremely exciting horror flick, for which there can only be one possible rating: absolutely worth seeing!

image + sound: Since only a data-reduced press sample was available for the test, no information about the final image and sound quality can be given here.

Result: "S-VHS" is qualitatively far superior to its predecessor. The Found Footage short film collection, even in its shortened version, has some very intense moments to offer, making this sequel a must for all horror fans. If you have the possibility, you should of course use the Uncut version. But for those who don't get the bare horror from the quite carefully set cuts, this version also offers some very stirring suspense. Recommended