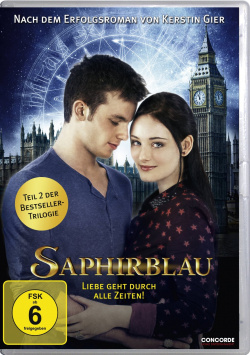 Film: So really Gwendolyn Sheperd (Maria Ehrich) still can't get used to the fact that she can travel through time. Although she has slowly got the time jumps under control and should now concentrate on her mysterious mission, she is always with her time travel partner Gideon de Villiers (Jannis Niewöhner), with whom she has fallen in love immortally. But there is no time for teenage flirtations, because after all Gwendolyn and Gideon are not supposed to do much less than save the world. And for that the girl has to learn the etiquette and dances of past centuries rather than make out with her beloved. But she does not really want to believe that her mission serves the purpose she is told. With the help of her allies - her friend Leslie (Jennifer Lotsi), the gargoyle Xemerius (spoken by Rufus Beck), the school ghost James (Kostja Ullmann) and the young version of her grandfather (Bastian Trost) - Gwendolyn wants to find out more about the well-kept secret of her family and thus fathom the truth behind her time travel missions. But time is running out, because the nasty Count of St. Germain (Peter Simonischek) is closely on her trail and tightens his deadly noose more and more...

"Saphirblau" is the sequel to the hit movie "Rubinrot" and the second screen adaptation from Kerstin Gier's popular "Gemstone" trilogy. The production of this sequel could benefit from the fact that both in front of and behind the camera the team from part 1 has been reunited in large parts and also in terms of equipment, costumes and visual effects many things were already available that could be used. On the other hand, production time was somewhat shorter, which increased the pressure on the makers. After all, more leaps in time and historical mass scenes had to be realised in less time. And in terms of effects, the furious finale and the animated figure of the waterspout Xemerius should also be added to it.

The result has the same strengths, but unfortunately also similar weaknesses, like "ruby red". The greatest strength here is leading actress Maria Ehrich, who, as a time-travelling heroine, is just as convincing against her will as she is as a normal, lovesick teenage girl. With a lot of charm and a pleasant naturalness Ehrich easily plays over some of the script weaknesses. The chemistry between her and Jannis Niewöhner is harmonious, which also makes the romantic aspect of the story work well. But at the same time this is also one of the movie's biggest weaknesses. The focus of the film was too much on the not always easy relationship between Gwendolyn and Gideon, which simply wasted much of the tension that the novel offers. However, since the story somehow seems to spin in circles in this romantic aspect and somehow seems repetitive, the tension is slowed down again and again and in the long run there is even something like boredom spreading.

Here it would have been very good for the movie to get away from the overly clear "Twilight"-water and to focus more on the fantasy adventure than on the teen romance. The second problem, as with "ruby red", is the clear definition of the target group. While many aspects, including romance, tend to appeal to girls aged 14 and over, other moments suggest that younger children up to the age of 12 are more likely to be addressed here. The design of Xemerius alone has been trivialized to an extreme degree for children, and Katharina Thalbach's game is also so exaggerated that only children can laugh about it. Younger children may find the story itself exciting, but they find the many smooches rather disgusting. And for teenagers who like Gideon or Gwendolyn or watch the movie because of the fantasy elements, Xemerius just had to be cooler to really work.

If the production was clearly aimed at a young audience of 14 years and older and if the script had concentrated less on the romantic back and forth, then "Saphirblau" would have had what it takes to be a great fantasy adventure. The potential is not only recognizable in the book template, but also in some scenes of the film adaptation. But like "Rubinrot" this movie also gambled away a lot of good possibilities. The whole thing is still nice adventure entertainment, but nothing more. But at least: those who already liked the "Ruby Red" movie and didn't bother about the criticism points listed here will definitely love "Sapphire Blue". And for such fans, the following also applies: definitely worth seeing!

image + sound: There is nothing wrong with the audiovisual realization of the film on the DVD. The picture is absolutely clean and the colours are very powerful, which is especially noticeable in the beautiful costumes and the equipment. The sharpness of the image is at a very good level, especially with brighter outdoor shots, and even with darker scenes there are no serious quality losses. The sound is available in a powerful Dolby Digital 5.1 mix, as well as in an even more lively DTS mix. With both tracks, the dialogues sound well understandable from the speakers and the numerous sound effects ensure pleasant dynamics in the surround range time and again. Good!

Extras: The bonus material is not uninteresting, but unfortunately it is mostly too short and too promo-heavy. This applies to the three featurettes (4:48 min. in total) about the chronograph, the first great love and the witching hour, as well as to the six mini-clips (5:27 min. in total), which deal with stunts and costumes. Three Making of Clips follow about the good mood on set (ca. 1:22 min.), the Special Effects (ca. 4:27 min.), as well as about Xemerius (ca. 5:09 min.). Otherwise there is only the trailer and further program tips.

Fazit: Like already the predecessor uses also "Saphirblau" not the entire potential of the successful book collecting main. The good main actress, the convincing set and costumes and some nice effects at least comfort fans of the first part beyond the dramaturgical weaknesses. Those who already liked the "Ruby Red" film version will definitely love "Sapphire Blue". The DVD is technically very well done, the bonus material is unfortunately very scarce and superficial. Nevertheless there is one very clear thing for fans: Recommended!