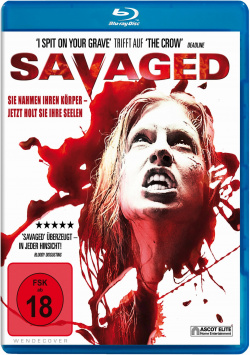 Contents: Deaf-mute Zoe (Amanda Adrienne) is overjoyed that she finally finds time to drive to her boyfriend Cody. She wants to fully enjoy the path to her great love. So she decides to take a road trip across the California desert. When she sees a group of men chasing two Indians and brutally slaughtering them, she tries to help - an attempt that has cruel consequences for the young woman. Because not only can she not prevent the death of the two hunted. Now the perverted hillbillies are after her too. They capture Zoe, rape her and torture her until every breath of life seems to have disappeared from her. Then the desecrated body of the woman is buried in the desert, where a shaman finds the young woman. With a sacred ritual, he tries to give Zoe back his life. However, the ghost of an apatch warrior, once killed by the ancestors of Zoe's murderers, enters her body. In this way he will finally retaliate and see the blood of his enemies flow. And so begins a bloody vendetta in which apparently nothing and nobody can stop the quickly decomposing undead...

"Savaged" is a brutal revenge thriller that mixes elements from works like "I spit on your Grave" with "The Crow". The result is a bloody low budget firecracker that is sometimes difficult to endure. It is generally not easy to see women being tortured and humiliated in films, as it happens here in the most heinous way. This is also one of the reasons why such works generally have a hard time at the FSK and often end up on the index. Savaged" did not pass the FSK exam in full. For the 18 release, some of the most drastic scenes had to be cut. The uncut version, however, at least received the Spio JK seal, which certifies that there is no serious danger to young people here.

The film really has it all. Not only the torture scenes are very rough and bloody. It is especially the following revenge campaign in which the film mutates into a real butcher's plate. What director Michael S. Ojeda has put together here with a small budget is really something to be proud of. Some effects are already a little trashy. But when it comes down to it, it shows once again that handmade effects can sometimes be more effective than expensive, elaborate computer effects.

The story isn't exactly new, but it is told in an exciting way and with some quite original ideas. And the actors are also quite convincing. Newcomer Amanda Adrienne in particular leaves a lasting impression as a merciless avenging angel. She also credibly embodies the initially very friendly, tender side of Zoe, as well as the bloodthirsty undead later possessed by the Indian spirit. It's also their game that comforts over some of the less successful moments.

"Savaged" may not really have what it takes to become a genre classic. But as a very intense, exciting and merciless horror shocker the low budget production works very well. Nothing for the tender, but for lovers of horror of the harder pace with some fantasy elements and lots of gore a very clear recommendation!

Picture + Sound: The Blu-ray image is characterized by a slightly artificial-looking coloration in which earthy, dirty tones predominate. The fact that the picture suddenly appears a bit blurred in some scenes is not due to a bad conversion of the sharpness of the picture, but is a stylistic device consciously used by the director and should therefore not be evaluated negatively. The sometimes slightly excessive contrasts, on the other hand, actually ensure that there are a few smaller point deductions in the detail display. All in all, the visual realization captures the atmosphere of the movie very well. And the sound can also convince with some good surround moments and atmospheric ambient noises. Good!

Extras: As a bonus the Blu-ray has a short but interesting Making of (approx. 10:16 min.), three cut or alternative scenes (approx. 10:25 min.) and four excerpts from the animated storyboard to offer.

Result: "Savaged" is a brutal revenge thriller, which just in its unabridged version can offer some rough effects, but also a neat story. This isn't entirely new, but has enough intense moments and tension potential to comfort you about some of the small weaknesses caused by the low budget. The Blu-ray presents the film in atmospheric picture and sound quality, the extras are short but worth seeing! For not too delicate genre fans absolutely recommendable!