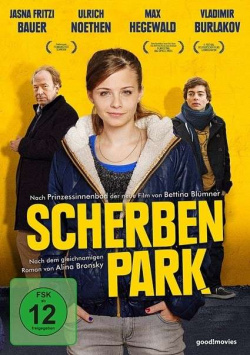 Film: 17-year-old Sascha (Jasna Fritzi Bauer) has really not drawn the big lot in life. Her mother was brutally murdered by her father-in-law, Vadim E., and since then the girl has had to take care of her younger siblings, cope with their hatred and grief, and then cope with the dreary everyday life in the grey suburban settlement, which the young people only call Scherbenpark. But Sascha didn't let it destroy her. She has become a strong young woman who can stand up to the stupid sayings of the hormone-driven boys from the settlement and who also stands up for her little brother when he is bullied by older people. But when an interview with Vadim is published in the newspaper, in which the murderer is portrayed as a sinner, the girl can no longer keep her anger in check. She wants to put the responsible editor Volker Trebur (Ulrich Noethen) to the test. He is visibly sorry for the publication of the insensitive article and wants to make up for his mistake. And before she knows it, Sascha lands in a new, bourgeois life at the side of Volker and his son Felix (Max Hegewald), in a world completely unknown to her, in which completely new sides of life are opened to her...

With her documentary film "Prinzessinnenbad" filmmaker Bettina Blümner has proven herself to be the perfect candidate for the feature film adaptation of Alina Bronsky's debut novel "Scherbenpark". And indeed, Blümner manages perfectly to transport the world in which the main character Sascha grows up, far away from all clichés, to the screen with an extremely good power of observation. It perfectly bypasses a mistake that many other filmmakers would certainly have made. Although Sascha's own life is overshadowed by a traumatic tragedy and she is confronted day after day with failed existences, shattered dreams and a certain hopelessness in the housing estate, the film does not soak in dreariness and social shock. Instead, clever dialogues and accentuated humour alternate harmoniously with moments of intense drama.

This results in a very engaging and above all entertaining overall picture. Scherbenpark" thus creates a feat that is far too rarely achieved in German films: the film manages the perfect balancing act between entertainment and aspiration, between thought-provoking moments and light-footed wit, between engaging charm and biting sharpness. Of course, this is not only due to the novel and its successful adaptation by screenwriter Katharina Kress, but especially to the leading actress Jasna Fritzi Bauer. Already in "Ein Tick anders" or "Barbara" the young actress has proven that she is one of the most interesting and strongest young talents for German cinema. And Jasna Fritzi Bauer underpins this impression again with a very multi-layered performance, against which even such good co-stars as Ulrich Noethen have a hard time coming.

It's a pity that films like "Scherbenpark" have such a hard time finding a broad audience, especially since the subject matter rather suggests a depressing piece of heavy author cinema. But that's not what this successful novel adaptation is all about. "Scherbenpark" is an entertainment cinema for heart and mind, a beautiful story and a well observed social portrait, which friends of the more demanding German film shouldn't miss. Absolutely worth seeing!

Picture + sound: The technical implementation is consistently at a good level. The image is clean, the coloration is very authentic and the sharpness is very high in most moments. Only in darker moments there are small deductions of points, as there is a slight image noise. The sound is available as stereo mix and Dolby Digital 5.1 mix. As not uncommon in a movie of this genre, both soundtracks are relatively unspectacular, as the rather frontally mixed dialogues set the tone. Smaller ambient noises are particularly noticeable with the Dolby Digital 5.1 Mix. Good!

Extras: As a bonus there are unfortunately only trailers.

Fazit: "Scherbenpark" is entertainment cinema for heart and mind, a beautiful story and a well observed social portrait. The film is carried by a wonderful leading actress, who confidently moves through a strong staging far away from common clichés. The DVD of the movie is technically well done, only the lack of bonus material has a negative impact. Nevertheless, the quality of the film alone is sufficient to be able to make a clear purchase recommendation.