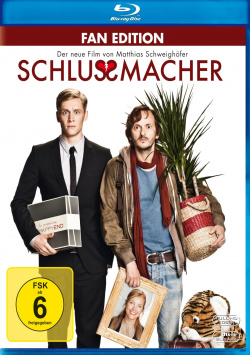 Film: Matthias Schweighöfer knows what his fans like. After he could celebrate successes not only as an actor but also as a director with "What a Man", especially in the profession of romantic comedy, he remains true to this recipe for success also with his second directing work "Schlussmacher". However, this time he relies a little bit more on dirty humor than on his charm and the humorous story, which diminishes the entertainment value a bit.

The story is really amusing and promising, even though it seems to have been stolen from various films such as "Der Auftragslover" or "Hitch": Paul Voigt (Schweighöfer) has an unusual profession: he is a professional finalist. For a Berlin separation agency, he informs the future ex-partners of his customers of their desire for separation. Day after day he watches relationships break down, which has left him emotionally extremely dulled. So it's no wonder that he can't give his girlfriend Natalie (Catherine de Léan) the closeness she wants. But at the moment Paul can't take care of his private life at all, as he is on the verge of becoming a company partner. In one week Paul has to complete eleven more separations, then he is sure of his ascent. But then he has to tell the sensitive Toto (Milan Peschel) of all people that his girlfriend Kati (Nadja Uhl) wants to part with him. And Toto just can't handle it. He never leaves Paul's side and even accompanies him on his business trip across Germany. And what was supposed to be an easy way to professional success quickly turns into a horror trip for Paul, at the end of which he could stand without a job or a girlfriend...

"Schlussmacher" begins with some very amusing moments that Paul shows at work. Schweighöfer again reveals his talent for a mixture of good comedic timing and an appealing visual realization. His second film also looks good and can easily keep up with many international productions with his good camera work and the harmonious editing. In addition, some very good actors could again be lured in front of the camera, whereby Milan Peschel in particular once again proves his versatility.

Thus "Schlussmacher" has what it takes to become a really good German comedy. But unfortunately Schweighöfer makes two mistakes, which unfortunately stand in the way of this result - at least for spectators who would not necessarily call themselves loyal Schweighöfer fans. The first mistake is the excessive use of flat notes, which the film actually wouldn't have needed. Of course, even "What a Man" hasn't necessarily distinguished itself through intellectual wit and some of the jokes that Schweighöfer uses in his second directorial work also work very well. Too often, however, the humour targets below the belt or uses completely exaggerated fat and faecal jokes to make the audience laugh. But since it becomes clear at the beginning that the original idea of the story offers the potential for much better gags, which is almost completely given away, this is just a pity. The high sympathy value of the actors helps little to iron out this shortcoming.

The second disturbing factor is the lack of any subtlety. This becomes clear precisely through the much too intrusive use of film music, a bad habit that Schweighöfer seems to have copied from his colleague Til Schweiger. While he had shown a little more restraint in this respect in "What a Man", he is going to the limit in "Schlussmacher". In some scenes it seems as if the actors are really yelling at the music, which in turn gives the impression that the viewer should be made aware of the gag shown in this scene with all their might. Yet, a bit of restraint at such moments would have been really good for the movie. Because even if the laughs turn out a little quieter, in the end a much more positive impression remains than when the humor is presented with the sledgehammer.

No question, for fans of Matthias Schweighöfer "Schlussmacher" is a lot of fun - well over 2 million cinema owners speak a very clear language. This is also due to the fact that the actor tries to be as close as possible to his audience through various fan events or social networks and thus also to find out what his audience wants to see. And that's what he delivers with his second film with some cutbacks. But even if the comedy can fully satisfy its target audience, in the end the feeling remains that Schweighöfer has more or less sold his talent, which he has proven impressively several times in the past, under value here. After all: for Hessian fans of the actor there are again some nice pictures of Frankfurt and a really delicious guest appearance of Badesalz. And despite the weaknesses there is a satisfied one for that alone: worth seeing!

image + sound: The Blu-Ray image is very clean and also pleases with a high image sharpness, through which even smaller details in most scenes come into their own very well. The colour scheme is slightly alienated, but captures the atmosphere of the comedy very well with the consistently warm tones and their powerful implementation. As usual in this genre, the sound is mainly dominated by the dialogues and the sometimes a little bit too intrusive soundtrack, but here and there there there are also some well used ambient noises or sound effects, which also demand the surround channels. Good!

Extras: The Blu-Ray offers a really interesting additional program. It starts with 11 scripts (approx. 21 min.), in which a very entertaining view of the shooting is thrown. The renewed cooperation with many team members from "What a Man", the shooting in Frankfurt, Brandenburg and at the Edertalsperre, the extras recruited via Facebook and of course the small guest appearance of Badesalz are the focus of the short clips. Short insights into the film premieres in Berlin (approx. 1:52 min.) and in the CineStar Metropolis Frankfurt (approx. 1:29 min.), where the Frankfurt fans impressively prove their volume, are also on the programme.

Further on it goes with an extra that shows very well how well Matthias Schweighöfer knows how to bind his fans to him. In "Schlussmacher - Die Show" (approx. 18 min.) he presented some scenes from the film to a mainly female audience and presented himself as a charming and clever entertainer in the breaks between the clips, which can now also be seen on this Blu-Ray. But that's not all: besides a music video of Blue (approx. 4:11 min.) and some funny outtakes (approx. 4:38 min.) there is also a commercially available Making of (approx. 11 min.), three promo clips, each almost 4 minutes long, a storyboard gallery (approx. 2 min.), as well as the trailer and teaser for the film. The name Fan-Edition is absolutely justified due to these extras!

Fazit: "Schlussmacher" is not quite as charming as "What a Man", because Schweighöfer relies much more on hooligans and little subtle humor. Nevertheless, the whole thing works very well for its target audience. Over 2 million cinema-goers speak a clear language there. The Blu-Ray presents the film in good picture and sound quality and also offers the fan some amusing and worth seeing extras. Who already liked the movie in the cinema, can't pass this disc!