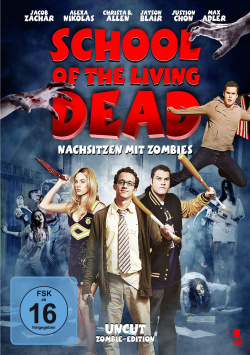 School of the Living Dead - DVD

Film: Über-Nerd Eddie (Jacob Zachar) believes that his day can't get any worse than being sentenced to detention. Although he is happy that he can spend his time near the cheerleader Janet (Christa B. Allen) and that she is able to laugh at her unrestrainedly, the presence of her boyfriend Brad (Jayson Blair) and his buddy Jimmy (Max Adler) clouds the pleasure noticeably. And also the constantly stoned casual dealer Ash (Justin Chou) and the goth girl Willow (Alexa Nikolas) don't make the extra time in the classroom much of a pleasure. But things can get even worse, because an uncanny zombie epidemic has spread across the school grounds, turning both teachers and pupils into bloodthirsty undead. For Eddie and the others, detention quickly becomes a fight for bare survival. They do succeed in entrenching themselves in the library. But in the long run they're not even safe from the zombies here. But how can they find a way out of the completely besieged school? And how far has this zombie epidemic actually spread?

actor and filmmaker Alex Craig Mann has two great passions: Zombie movies and the '80s teen comedies by John Hughes. For his debut as a feature film director he then thought of combining these two passions and staging a kind of "Breakfast Club" meets "Shaun of the Dead". With little budget and many good ideas, he set to work and shot the zombie comedy "School of the Living Dead" in only three weeks in May 2011. Seasoned with many allusions, such as to the George R. Romero classic "The Night of the Living Dead", the film repeatedly reveals man's passion for the genre.

The primarily from TV series such as "Glee" (Max Adler), "Revenge" (Christa B.), "The Night of the Living Dead" and "The Night of the Living Dead". Allen), "Greek" (Jacob Zachar) or "The Walking Dead" (Alexa Nikolas) may seem a bit too old for their roles, but they are still involved with a lot of fun. But all the good intentions and all the heart and soul that has been invested here can't prevent you from noticing the movie's trashy B-movie character very clearly. In some scenes this works really well, as it's precisely this that increases the fun factor significantly. This is always the case when it comes to fleeing from zombies or fighting them.

But when the dialogues are in the foreground, the whole thing doesn't work very well. That's because the characters simply lack the depth and cleverness of the script that made John Hughes' role models the classics they still are for many today. Even though the character constellation in the classroom certainly doesn't remind us of the one from "Breakfast Club" by chance, the characters remain completely colorless and interchangeable, which is why the viewer doesn't care much about their fate. The dialogues are anxious to be funny, but in most cases are rather flat.

The real problem of "School of the Living Dead" is, however, that the very open references to other films make it possible to compare them with each other and often cannot stand up to them. Because in itself the movie, apart from the not exactly well-done dubbing, is a quite entertaining B-movie with some nice ideas and amusing moments. If you take the whole thing exactly as that and don't expect more, you can prepare yourself for 84 short lying minutes. But if you want to see a technically as well as dramaturgically sophisticated zombie fun, you might quickly tend to want to force Alex Craig's husband to detention. Worth seeing!

Picture + sound: The picture on the DVD shows slightly exaggerated contrasts, but otherwise pleases with a harmonious colour scheme and a good overall sharpness. Only in dark scenes and with faster camera movements some small weaknesses can be spotted. The sound is available in German in three different soundtracks, whereby these differ only marginally from each other. In all three cases the dialogues are very centrally mixed, the ambient noises and audible sound effects, on the other hand, come into their own most powerfully with the dts track. All in all there's a good one for that: Gut!

Extras: As a bonus there's a detailed look behind the scenes (approx. 42:02 min, without UT), where makers and actors tell about the shooting and reveal some of the tricks with which the undead were brought to "life" here. In addition to the good making of, there is also the trailer and other program tips of the provider.

Fazit: "School of the Living Dead" was realized with a mini budget and a lot of passion. The result is not a highly professional glossy product, but a small zombie comedy, to which the small financial means are quite noticeable. But if you don't mind, you can enjoy the numerous allusions to various zombie and high school movies and some nice ideas. The DVD presents the film in good picture and sound quality and also has a good making of in the bonus offer. With a few exceptions, there is still one more: Recommended!