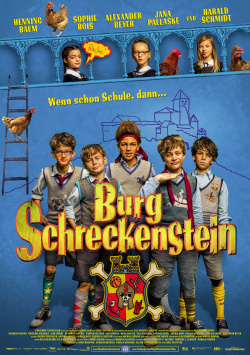 Enough is enough! After eleven-year-old Stephan (Maurizio Magno) has once again caused stress at school, his mother Melanie (Jana Pallaske) makes a drastic decision: Because as a stewardess she can't take care of him as intensively as he would need it now, she sends him to boarding school without further ado. At Burg Schreckenstein not only his grades should improve, but also his behaviour. It's just too bad that he becomes a member of the knight's secret society after small initial difficulties and breaks with his new friends Dampfwalze (Chieloka Nwokolo), Ottokar (Benedict Glöckle), Mücke (Caspar Krzysch) and Strehlau (Eloi Christ) a feud with the neighbouring girls' boarding school Rosenfels from the fence. When it culminates in the girls being accommodated at Burg Schreckenstein, the chaos seems perfect…

It took a long time for Oliver Hassenkamp's popular youth book series "Burg Schreckenstein" to make its way to the big screen. After 27 books published between 1959 and 1993, radio plays and audio books, screenwriters Christian Limmer and Ralf Huettner brought the boys from Schreckenstein into the next millennium. For the cinema version, elements from various volumes of the series were taken over and moved to the present day. Also the characters, which were largely taken over from the books, were modernized a little. The aim is to introduce children who have never read a Schreckenstein book to the popular adventures.

The result is a rather conventional German children's film. But this is not necessarily to be understood negatively. Huettner ("Vincent wants the sea") does indeed make use of some overly hackneyed elements. But all in all he offers the young target group an amusing, atmospheric adventure with good actors, a catchy soundtrack and a great location, which especially guys will find really cool. The humour is child-friendly, and it's pleasant to do without the flat gags that are so often found in children's films. Here, too, some badly worn clichés are used. But children will not be bothered and will have a lot of fun.

Although this modern version of "Burg Schreckenstein" is not quite as charming as the original book, the makers have succeeded in making an entertaining and funny children's film that serves its target group well in every respect. And since this counts more than the fact that the accompanying parents are also well entertained, there is a clear adventure for this boarding school adventure: Worth seeing!