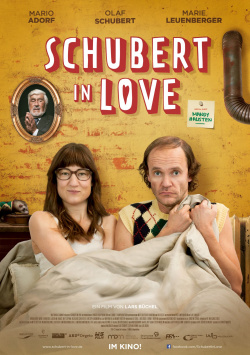 Olaf Schubert (Olaf Schubert) descends from a great sex. His family can be traced back to Casanova, Spartacus and of course Mozart. But now this sex is in danger of extinction forever. Because Olaf is single - and that's what he wants to stay. After all, all relationships end in blood-sucking offspring, also called children, and Olaf has no desire at all for that. But when his father (Mario Adorf) falls seriously ill, he takes a heart to fulfill the old man's great wish of a tribal owner. It can't be that hard to find the right woman for the job. Or is it?

"Schubert in Love" is the cinema debut of Federal Olaf and Pullunder enthusiast Olaf Schubert. Who knows his programs, his show "Olaf TV" or his appearances in various television programs like the "heute Show", knows that the humor of Olaf Schubert is already very special. And exactly the same applies to the comedy by Lars Büchel ("Erbsen auf halb 6"). Whenever Schubert's sometimes very subtle play with the German language and his wonderful word creations are used, this somewhat different romantic comedy works very well. Especially in direct contrast to an established actor like Mario Adorf, Schubert's game seems extremely amusing.

And also moments like an insight into his work process or his "girlfriend casting" have a high entertainment value. But unfortunately there are also a lot of gags, which are just flat or simply go up in smoke. And at some point Schubert's naive-egoistic-asexual behavior also loses its comedic charm. If you can't really do much with Schubert's humor, you won't be amused after half of the movie at the latest, but you'll just be annoyed.

On the other hand, if you're a fan of the unadjusted comedian, you'll easily put up with the weaknesses of the script and the production. Because the pullover on two legs remains so true to his style until the end that the viewers, who could not only laugh about 5 minutes of short appearances at "TV Total" and Co., but also about his complete programs - including vocal parts - could laugh heartily, get their money's worth again and again. And exactly this audience will surely be "in Love" with "Schubert in Love". Worth seeing