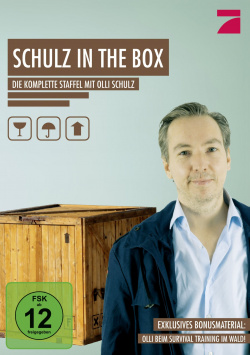 Schulz in the Box - DVD

Film: The musician, presenter and entertainer Olli Schulz has been on stage for almost two decades now and entertains his audience in various ways. Shortly before his fortieth birthday, however, he wonders whether he is living exactly the life that makes him really happy. Or would he be much more satisfied in another profession or in another environment? Would a completely different way of life perhaps fill him more? Wouldn't it be nice if he could just take a look at the lives of other people to see if he hasn't yet found his true destiny? Olli doesn't have to tell his buddy Joko Winterscheidt about this idea twice. The former sidekick from "Circus Halligalli" is unceremoniously put into a box and exposed to a completely unfamiliar terrain: a shared flat of the "Fuck the Forrest" movement - a group of activists who organize naked protests to save the rainforest and make porn movies. But this visit is only the beginning of an interesting, exciting and extremely entertaining TV experiment, which will lead Olli Schulz to Tokyo, Moscow, to prison, to the gangster rapper arrest warrant to Offenbach, to Antonia from Tyrol and to Nepal. Whether life is there, for which Olli Schulz would exchange his previous one?

"Schulz in the Box" is a successful TV experiment in every respect. The seven-part series is entertaining, surprising, original and interesting. Much of this is certainly due to the selection of habitats and ways in which Olli Schulz has to immerse himself for 48 hours each. Because what is unknown terrain for Schulz is probably a strange and sometimes even alien world for most viewers. Quite outstanding is the rightly highly praised episode "Im Knast", which, far away from all clichés, makes clear in a very oppressive way what it means to be imprisoned. But also the rental family in Tokyo or the difficulties to make parentless street children in Nepal laugh are good examples of snapshots that make this series so special.

Another important reason why the concept works is Olli Schulz himself. His very open-minded nature paired with his relentless honesty make his short trips into the lives of others refreshingly different from the usual standard mush. Schulz always shows respect to his counterpart and does not rashly judge his foreign opinions. He tries to adapt, but also says honestly if he finds something stupid or feels extremely uncomfortable. What he experiences on his travels in the box is sometimes extremely amusing, sometimes surprising, then again slightly disturbing and also very sad. For example, the cuddling you buy in Tokyo, which is a shocking sign of loneliness in a metropolis of millions, is probably one of the most depressing moments in the series, along with some scenes from the prison episode.

"Schulz in the Box" is real quality television, which mixes entertainment with aspiration in a very original way and skilfully avoids drifting into flat humor or into the exposure of the people portrayed here. Not only for fans of Olli Schulz, but for all lovers of unusual TV formats absolutely worth seeing!

Picture + Sound: The picture of the DVD is very clean and has a good overall sharpness, as well as a harmonious color scheme. The stereo sound is rather unspectacular overall, but makes the voices and the music sound clear and powerful from the speakers. For a TV documentary series like this, that's perfectly satisfactory. Good!

Extras: As a bonus on the second DVD there are two short cut scenes from the episode "Gangster Rap", as well as almost 15 minutes from the planned but never broadcast episode "Im Wald". Worth seeing!

Fazit: "Schulz in the Box" is a highly interesting TV concept that lives not only from the fact that extreme contrasts - whether cultural or ideal - meet here. Olli Schulz's very open-minded, but also refreshingly honest way of dealing with unusual situations makes all 7 episodes of the series absolutely worth seeing. The DVD presents the TV experiment in good picture and sound quality. As an extra worth seeing there are some scenes from a planned but not broadcasted episode. absolutely recommended!