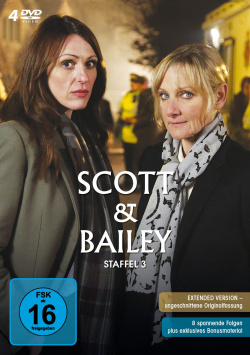 Film: Janet Scott (Lesley Sharp) and Rachel Bailey (Suranne Jones) determine again! In the third season of the British success series "Scott & Bailey", the two women not only have to investigate a mysterious murder case that runs through the entire season. They also have to deal with a number of private problems and do their everyday police work. The whole thing takes on extremely dramatic proportions when Rachel herself is targeted by the investigators during the investigations into the murder of her ex-boyfriend by her brother. If she can't prove that she didn't incite her brother to the murder, losing her job would probably be her least problem. But even the fact that her young marriage seems to have come to an end doesn't make life any easier for Rachel. Janet, on the other hand, wants to concentrate entirely on the challenges that her role as deputy detective sergeant entails. But private life is not that easy to hide. And when it comes to a big fight between her and Rachel, the chaos is perfect. But then a very personal case forces the two friends to pull themselves together again and work together as a strong team. Because only then duo are Scott & Bailey really unbeatable...

The third season of "Scott & Bailey" quickly shows again where the strengths of the British success series lie. Of course, there are the two very different main characters, who aren't overstylised to infallible heroines, but who are portrayed as normal women, who are allowed to show many strong sides, but also some clear mistakes and all too human weaknesses. This makes the two women very accessible to the viewers, which is why they are often forgiven for making one or two wrong decisions in their professional or private lives.

The not always linear narrative style also makes the series very interesting and, despite the rather conventional stories, extremely exciting and stirring. And finally, the good mixture of criminal cases and the private life of the policewomen makes up the very special charm of the series. It also pays off that, in addition to the everyday police work, a main case runs through the entire season, which keeps the tension level at a consistently high level with some unexpected twists and turns.

For the third season, the makers have also come up with a conflict that puts the friendship between Janet and Rachel to a hard test. This also makes the whole thing very interesting on the interpersonal level, especially as they end up facing the difficult task of putting their personal differences aside in order to solve an extremely dramatic case. Thanks to the very strong play of Suranne Jones and Lesley Sharp, the last episodes of the season are extremely thrilling due to the private tensions between the women.

"Scott & Bailey" may not reinvent the wheel, but with its mixture of classic police series and strong female drama with a fine pinch of British humour, it blows a breath of fresh air through the crime genre. Anyone who liked the first two seasons or who simply appreciates good series food from Great Britain should definitely take this opportunity. Recommended!

Picture + sound: The audiovisual implementation of the third season is at a good to very good TV level. The image is absolutely clean, the colors are mixed harmoniously and the sharpness of the image is at a very high level in bright moments. In darker moments there are slight quality losses in the detail display, but overall an absolutely positive overall impression prevails. The sound is present in an unspectacular stereo mix that more than fulfils its tasks satisfactorily. Good!

Extras: As a bonus there is a worth seeing look at the shooting of the third season on the fourth disc (approx. 15:13 min.), which is available in the English original without subtitle options.

Fazit: "Scott & Bailey" again offers very good thriller entertainment in the third season, which gets a special touch by the dynamics between the two unequal main characters. In the third season the friendship of the two policewomen is put to a hard test, which gives the series some new dramatic impulses. Cruel murders, Rachel under suspicion of having incited her brother to murder, failed marriages and surprising twists in her investigations make these eight episodes once again the best British TV entertainment with plenty of women's power. For fans and all who want to become fans, the following applies: absolutely recommendable!