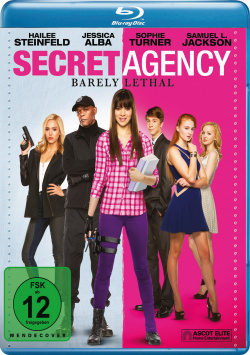 Film: Actually she would like to be a simple teenager. But No. 83 (Hailee Steinfeld) is part of a top secret government project that trains children to become real fighting machines. And as such, social contacts and a normal life are strictly forbidden. But this changes when No. 83 is sent by her trainer Hardman (Samuel L. Jackson) on the dangerous mission to capture the terrorist Victoria Fox (Jessica Alba). Although she succeeds, she plunges into supposed death during the mission. At least that's what Hardman thinks and No. 83 doesn't intend to convince him of the opposite. She uses this unique opportunity to start a new life. As an exchange student Megan Walsh, she goes into hiding with a family in the small town of Newton. Here she wants to get to know normal high school life and enjoy it to the full. Too stupid, though, that a school is far from the way it is known from films. And that she believed that her camouflage could be maintained for a long time in times of YouTube was probably also a little naïve and could now have deadly consequences for her and her new friends…

In "Secret Agency" director Kyle Newman ("Fanboys") mixes elements of agent thrillers like "Hannah" or "Salt" with motifs from classic teen comedy. But with Hailee Steinfeld ("Pitch Perfect 2"), Sophie Turner ("Game of Thrones"), Thomas Mann ("Project X"), as well as Samuel L. Jackson and Jessica Alba, he was able to engage a quite prominent ensemble, which then also shows a pleasant joy of playing. With a lot of humour Newman takes the clichés of the genres to task without making them completely ridiculous. Especially No. 83's first attempts to integrate herself into everyday school life based on various teen comedies she studied have turned out to be extremely amusing. And also the short insights into the education of the children in the Prescott Academy offer a high entertainment value.

Leider the staging falls towards the end increasingly into the clichés, which she has taken before still so charmingly on the scoff. Especially the final loses a lot of bite and turns out to be too good. But Jessica Alba as an unscrupulous terrorist or Sophie Turner as a nasty bitch are simply a great pleasure and consolation for many a weakness in the last act. The isolated action sequences and fight scenes are relatively well-behaved and unfortunately also reveal some very poor green-screen effects. But the target audience, to whom the film is primarily directed, won't find this any more disturbing.

"Secret Agency" is an entertaining action comedy, which especially girls between the ages of 12 and 16 can enjoy very much, but which also offers enough entertainment potential for boys for an entertaining home cinema evening. If you like movies like "Girls Club" or "Bring it on", you should definitely take a look here. Worth seeing!

Picture + sound: Blu-ray picture and sound quality offer exactly what can be expected from a current action comedy. The picture is absolutely clean and also otherwise the visual conversion leaves a consistently positive impression with a harmonious, powerful color mixture and a good overall sharpness. The sound is present in a very lively Dolby Digital 5.1DTS-HD Master Audio 5.1 mix, in which the music or various sound effects repeatedly provide a good dynamic in the surround range. Good!

Extras: As a bonus the Blu-ray has some promo interviews with the actors and the crew in addition to the trailer. The most interesting interview is the one with the director, because there is also a little insight into the shooting.

Fazit: "Secret Agency" uses a really nice idea. Crossing a typical high school movie with secret service action offers a lot of potential, which director Kyle Newman also uses quite well. Only in some scenes the whole thing turns out to be unnecessarily silly or a bit too smooth. All in all, this teen comedy is a lot of fun. The Blu-ray presents the film in good picture and sound quality. As a bonus there are some promo interviews, which don't reveal more than what kind of music the fictitious characters have on their iPod. Nevertheless this is still enough for a convinced one: Recommended!