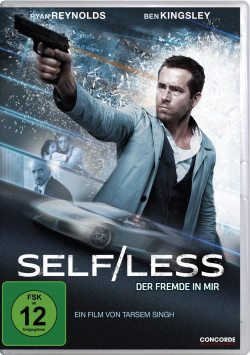 Self/Less - The stranger in you - Blu-ray

Film: He is very rich and extremely successful professionally. But there are some things you can't buy with money. Billionaire Damian (Ben Kingsley) has to experience this on his own body when he is diagnosed with cancer in the incurable final stage. But there is still so much he wants to achieve and do before he blesses the temporal. Turns out his wealth could actually help him there. Because with a novel, top secret technology, the consciousness of one person can be transferred into the body of another. With this procedure called "shedding", eternal life is theoretically possible - as long as the financial means are sufficient. Damian does not hesitate long to agree to participate in the procedure. And so he soon wakes up in a younger body (Ryan Reynolds), to which he has to get used in a long therapy phase. Afterwards he should start a new life as Edward and enjoy the regained youth. But again and again he is plagued by visions that seem to be memory fragments of the original owner of Damian's new body. But when he begins to want to get to the bottom of this, he puts his dearly bought life at risk again. After all, "Shedding" should remain a secret - and that at all costs…

Tarsem Singh is known for extravagant films with unusual effects, a pronounced colourfulness and eccentric costumes. The great fantasy drama "The Fall", unfortunately completely lost in the cinema, is probably the best example of this. But also in the successful thriller "The Cell" his penchant for something more extraordinary entertainment cinema was clearly noticeable. Elements of this thriller are taken up again by Tarsem Singh in his latest film "Self/Less - The Stranger in You". Here, too, the spirit of one human being enters the body of another. But this time it is much less eccentric and surprisingly conventional than in earlier works by the filmmaker. Unfortunately, this means that the picture language is not strong enough to be able to distract from the dramaturgical weaknesses.

And unfortunately these are not exactly a rarity in the course of the almost two-hour running time. Certainly, logic should not be demanded of the basic idea anyway. But at least such a fantasy story should be told in an exciting and thrilling way. And that's exactly what the film doesn't succeed at all at some points. If Singh had picked up the tempo in a few moments and scissored other scenes, this body swap could have been an extremely exciting mystery cinema. However, the many positive aspects are overlaid by unnecessarily tough and dramaturgically weak moments, which of course has an effect on the overall impression at the end.

No question, the action sequences are well to very well done and the actors - especially Ryan Reynolds - do their job really well. The visual language is also very stylish and atmospheric in its own way. Nonetheless, as a viewer you always get the feeling that this movie sells itself well below value and could have been a lot bigger and more thrilling. And that is really a pity in view of the very high entertainment value of the story. So it can be said that "Self/Less - The Stranger in You" is not a bad movie. He's a long way from that. But at the end it's just a nice, visually well done entertainment movie, that could have been much more. The exciting tension cinema, which lies hidden somewhere here, is too seldom revealed to be able to assert itself against the tenacious weaknesses. That's why in the end there is only one thing left, even with small prints: worth seeing!

image + sound: The image of the Blu-ray captivates with a good to very good image sharpness, which also shows off many smaller details. The colouring is very atmospheric, dirt or other visible weaknesses are not recognizable. The powerfully mixed sound shows its strengths especially in the action sequences. In addition to the easy to understand dialogues, sound effects such as shots, explosions or squeaky car tires repeatedly provide powerful movement in the multi-channel area. Good!

Extras: Unfortunately the disc is a bit disappointing when it comes to bonus material. Because apart from two short, relatively irrelevant promo featurettes (together about 5:07 min.), the trailer and some program tips there's nothing to see here.

Fazit: "Self/Less - Der Fremde in dir" is a decent fantasy thriller, which doesn't make full use of its possibilities on a visual level. Nevertheless, the movie offers enough entertainment value and a good portion of action, in order to make up for some of the weak points. The Blu-ray presents the whole thing in very good picture and sound quality. Similar to the main movie, the bonus material could have been more. But there is still a clear one: Recommended!