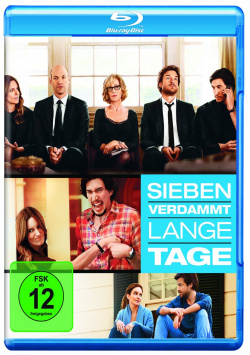 Content: For Judd (Jason Bateman) it's really not an easy time. First he catches his wife Quinn (Abigail Spencer) in bed with his boss (Dax Shepard). And then his father dies, too, with whom he has not had very close contact for a long time. At the funeral Judd meets his siblings Wendy (Tina Fey), Phillip (Adam Driver) and Paul (Cory Stoll) again - and soon old rivalries and conflicts come to the surface again. Judd wants to return to New York as soon as possible, but then his mother (Jane Fonda) tells him and his siblings that it was their father's last wish that they honor him with a Shiva, a Jewish custom according to which they are not allowed to work or leave the house for seven days. Seven damn long days in which they are forced to deal with each other, with their marriage problems and with themselves. This can only end in a total chaos of emotions...

With the film adaptation of the bestseller "Seven Damn Long Days" by Jonathan Tropper, director Shawn Levy ("Nachts im Museum 1 -3") has staged an entertaining family comedy that scores especially with its first-class actors and some really amusing gags. Especially Jason Bateman proves to be a safe bank once again, as he manages to make his not very multi-layered character seem likeable and interesting. But also "30 Rock" star Tina Fey and Adam Driver ("Girls", "Star Wars: Episode VII") get more out of their characters than the script actually allows. The well-chosen cast pays off extremely especially in moments that focus on quieter tones and restrained humour.

One could accuse the script, for which Jonathan Tropper himself adapted his novel, of not being filled with originality and repeatedly getting lost in common cliché conflicts between the members of the Altman family. However, this isn't the movie's real weakness, as Tropper treats these clichés with enough wit and charm, so that they still work out quite well. What is disturbing is the decision to season the story again and again with crude jokes and completely unnecessary toilet humor. Thus the film loses not only at level, but also some at maintenance value, which is displaced by unpleasant Fremdschäm-Momente.

Dadurch "Seven damn long days" still for a long time no bad film, but it remains evenly behind its possibilities. If you can make friends with the less successful moments, you will get a really nice comedy about a dysfunctional and yet somehow likeable family, which has some really nice and funny moments to offer, which might even seem familiar to some viewers, who even come from a bigger family. If you like light American comedy food and if the good actors can comfort you over the rather flat gags, you can confidently spend "Seven damn long days" with the Altmans. Worth seeing!

Picture + sound: The technical implementation of Blu-Ray is at a very high level. The sharpness is great and allows even small details and textures to come to the fore. The colour scheme looks very warm and natural and the balance of black levels and contrasts also support the positive overall impression of the image quality. The same can be said for the sound. Although there is no big fireworks of effects due to the genre, the surround channels are still repeatedly stressed by atmospheric ambient noises and smaller sound effects, which results in an overall very harmonious sound carpet. Very good!

Extras: Besides an interesting and sympathetic audio commentary by director Shawn Levy and author Jonathan Tropper (unfortunately not subtitled), the Blu-ray still has six edited scenes (approx. 13:34 min.), a discussion between author and director (ca. 4:28 min.), as well as some outtakes and alternative takes with Ben Schwartz as Rabbi "Boner" (ca. 6:27 min.). In the section "starting situations" there are also some short featurettes about the brother-sister relationship with Jason Bateman and Tina Fey (ca. 5:38 min.), about the matriarch with Jane Fonda (ca. 3:59 min.), about sibling rivalry with Adam Driver and Corey Stoll (ca. 5:04 min.), as well as about the shooting, also called "the choreographed chaos" (ca. 5:38 min.). Good!

Fazit: "Seven damn long days" works as a family comedy thanks to the good actors - above all Jason Bateman and Tina Fay - quite well. The movie has a lot of very funny scenes, lively dialogues and also some very nice moments to offer. Only the decision to season the whole thing with a few coarser jokes and unnecessary faecal humour clouds the otherwise very positive overall impression. At the Blu-ray the film presents itself in appealing picture and sound quality and also the bonus material has some very worth seeing contributions to offer. If you like light comedies about dysfunctional families, you can take a look here. Recommended]