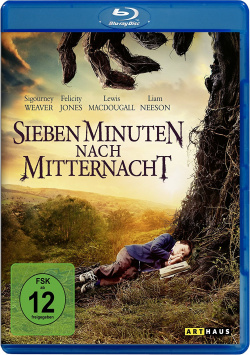 Film: How would Conor (Lewis MacDougall) like to be bothered with normal teenage problems. Everything in his life seems to be going down the drain right now. His mother (Felicity Jones) is seriously ill, which is why the boy has to move in with his cold, strict grandmother (Sigourney Weaver). He has little sympathy at school. On the contrary. Every day Conor is harassed by other classmates. And his father (Toby Kebbell) only has time for his new family. One night when Conor wakes up from a nightmare, he is shocked to find that the big yew tree in front of the house has turned into a monster that visits him regularly at seven minutes after midnight to tell him three stories. Not knowing if he is only dreaming, the monster with its stories leads him on an unusual and difficult path - the path to a truth the boy does not want to admit…

"Seven minutes after midnight" is a touching story about the difficult threshold from childhood to adulthood, about grief, loneliness and the need to let go. With great sensitivity and an imaginative visual language, director J.A. Bayona ("The Orphanage") has transformed Patrick Ness's award-winning novel into a gripping cinematic drama, which in 2016 became the most successful film of the year in his native Spain. The great art of this story, both in the form of the book as well as in its cinematic adaptation, is that it is told from the point of view of a child, but at the same time deals with many topics with which one can also identify as an adult.

The contrast to the gravity of reality and the admittedly somewhat gloomy playfulness of the fantasy elements seems at first to be too great a discrepancy for which the staging could fail. But soon it becomes clear how the two are connected - and that gives the film its very special character. "Seven minutes after midnight" shows impressively how sensitive the child's mind can find a way to deal with an unspeakable truth. However, this is not only very nicely illustrated by the visual realization, but also by the great play of the actors.

Lewis MacDougall and a really great Sigourney Weaver can leave a lasting impression. Towards the end there is a moment between the two, which is very close to the edge of kitsch, but which the two deliver so credibly and confidently, that it can give the viewer goosebumps and maybe even lead to some tears. "Seven minutes after midnight" is sad and beautiful at the same time, imaginatively playful and oppressively realistic. A wonderful film that gives a life-affirming light of hope even in the deep darkness of mourning. Absolutely worth seeing!

Picture + sound: Both in the feature film sequences and in the animated scenes in which the monster tells the stories, the visual implementation of the Blu-ray can be achieved with an atmospheric color scheme, a very high sharpness of detail and a pleasant image depth. The sound can play out its strengths especially in the scenes in which the monster appears, as well as in the grand finale. Good.

Extras: The bonus material consists primarily of the usual promotional material. After a short introduction (ca. 1:22 min.) a look at the origin of the story follows (ca. 5:39 min.). Further features are dedicated to the monster (approx. 6:41 min.), the cast (approx. 4:54 min.) and the director (approx. 2:12 min.). We continue with a making of the effects (about 8:19 min.) and interviews with Liam Neeson (about 2:26 min.), Felicity Jones (about 3:05 min.), Sigourney Weaver (about 2:21 min.), Lewis MacDougall (about 1:56 min.), director J. A. Bayona (about 1:10 min.) and author Patrick Ness (about 2:18 min.). Some cut scenes (approx. 6:34 min.) round off the video offer. In addition, the disc has two optional subtitled audio comments: A Spanish one with the director and an English one with the author. Both comments are interesting, but also a little bit dry.

Fazit: "Seven minutes after midnight" is sad and beautiful at the same time, imaginatively playful and oppressively realistic. A beautiful film, which presents itself on the Blu-ray in very good picture and sound quality. The bonus material is quite extensive, but overall very promo-heavy and too superficial to be able to convince all along the line. But the movie alone is enough to reach this well-deserved conclusion: Absolutely recommendable!