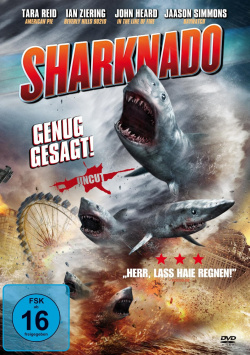 Content: >The former professional surfer Fin (Ian Ziering) is not only worried about his existence as owner of a small bar on the beach of Long Island, when a big cyclone threatens the coast of California. Even his ex-wife April (Tara Ried) and the two children together want to get Finn to safety from the deadly storm at all costs. So he and his buddy Baz (Jaason Simmons, the waitress Nova (Cassie Scerbo) who adores him and his regular George (John Heard) make their way through rain and storm to get to April. But soon they have to realize that the hurricane brings with it a much greater danger: a whole swarm of hungry sharks was dragged along by the pull of the storm and is now raining down on L.A.. And so Fin and his friends soon have to defend themselves not only in the water and on the flooded streets, but also in the air against flying sharks - and that proves to be extremely difficult in the midst of a storm...

There are always movies that cause a tremendous hype in advance because of their title or their initial idea, even before anyone has even sighted a minute of footage. "Snakes on a Plane" was a movie like this, which even got some new scenes with more gore and naked skin in the course of the enormous attention, which should satisfy the target group. Such a hype is of course advantageous in that it brings the studio almost free advertising. The disadvantage, however, is that such films very rarely succeed in meeting the enormous expectations that are generated in this way.

"Sharknado", with its wonderfully absurd title and the wonderfully stupid initial idea on the net, quickly achieved enormous cult status. The film produced for the TV station SyFy received so much attention that it even made it into the cinemas in some countries for a short time. But if you know SyFy productions like "Sharktopus", "2-Headed Shark Attack" or "Sand Sharks", you shouldn't expect especially high cinematic quality here. Nevertheless, not least because of the rapidly cut, quite amusing trailer, a very fun B-Movie trash could be expected, which clearly belongs in the category "so bad that it's good again".

The problem is that "Sharknado" itself can only live up to these expectations towards the end. There are just too many scenes in which the actors just sit in their car, clearly standing in the studio and stare bored into the scenery of constantly repeating pictures, without anything really happening. No question about it, there are moments when "Sharknado" is really a lot of fun in its very special way. But the potential, the title, the trailer and the basic idea promise, is used far too little. After all, there is hope that this shortcoming will be made up for in the announced second part.

In a work with the title "Sharknado", nobody should expect a good film in the classical sense. The flying sharks are really only something for hardcore B-Movie fans. Anyone who has enjoyed two-man sharks, Piranahcondas, Sharktopusse, Dinocrocs or Mega Piranahs deliciously and can overlook flat dialogues, pale actors and a very simple dramaturgy will also have great pleasure in this stormy shark storm!

Picture + sound: "Sharknado" came to some selected cinemas in the USA and also in Germany because of the big hype, but was actually produced for television. This can also be seen in the audiovisual implementation, which is altogether completely in order, but which could have turned out much better, especially in terms of sharpness of detail. The sound is presented in a rather powerful Dolby Digital 5.1 mix, which simply can't keep up with larger cinema productions in terms of surround effects. All in all, okay, but no revelation. Good!

Extras: Besides the trailer and other program tips of the provider, the DVD also has a promo-making of (about 10 minutes) and a nice gag reel (about 5 minutes) to offer. However, there are no subtitle options for the extras, as for the main film, which is why the short bonus material is only worth seeing for Sharknado fans with good English language skills.

Fazit: "Sharknado" has generated a hype in advance through its title and the wonderfully absurd initial idea, which the film itself cannot withstand. Because the shark tornado only takes place in a few moments of the 82 minutes running time. Apart from that, the actors who try hard to make their way through the movie are able to beat each other with a script that isn't exactly of high quality and a very trashy staging, which unfortunately all too often loses sight of the fun factor that the title promises. But those who liked movies like "Sharktopus" or "Sand Sharks" will also enjoy the deadly "Sharknado". Nevertheless: only worth seeing for trash fans!