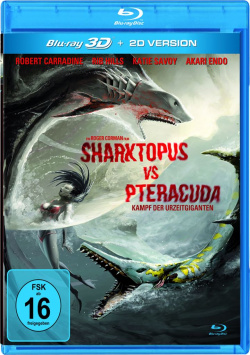 Contents: After the gluttonous one was killed in a particularly explosive way, the marine biologist Lorena (Katie Savoy) finds an egg capsule from which a mini Sharktopus hatches. He is raised in her uncle's amusement park. Lucky there's this Sharktopus. The shady scientist Dr. Symes (Robert Carradine) crossed a pterodactylus flying dinosaur with a barracuda on behalf of the military. The result - the Pteracuda - is extremely deadly, fast and almost indestructible. When the creature is to be stolen by a terrorist organization, the flying bioweapon can escape. And now the Pteracuda wants to satisfy hunger at completely normal humans - and only the Sharktopus can stop it…

"Sharktopus vs. Pteracuda" is the next contribution of the trashy animal combinations, which are released in beautiful regularity on lovers of B-monster movies. In this battle between the well-known Sharktopus and the newly bred Pteracuda, produced by B-Movie King Roger Corman, things really get going. Even if the effects are mostly underground and the acting performance is even worse, the makers offer the viewer at least exactly what the title promises: a lot of duels between the two mutations.

Naturally, "Sharktopus vs Pteracuda" is still not a good film. However, such productions do not have this claim at all. They want to offer their audience trashy fun. No time is wasted on sophisticated dialogues or first-class effects. This becomes particularly clear in this film with the amusing guest appearance of US-Late Night Talker Conan O`Brien. It may be revealed here that he does not think long and hard and loses his head when meeting the Sharktopus in the truest sense of the word - which, however, does not show any resemblance to Conan O'Brien. Here not even the effort was made to cover up that apparently the head of any mannequin was used. But exactly through such things the movie flirts with its trash factor - and that makes it quite amusing.

Who can amuse himself about Sharknados, Sandsharks, Mega Piranhas, Dinocrocs and other creatures, will also have a lot of fun at the fight "Sharktopus vs Pteracuda". If, on the other hand, "Anaconda" was too trashy for you, you'll be desperately plucking your hair after just a few seconds. Therefore: Only worth seeing for fans1

Picture + sound: The movie is included on the Blu-ray in 3D and 2D. Only the 2D variant was tested. The fact that this was produced quite inexpensively for television is also noticeable in the audiovisual implementation, which is altogether completely in order, but could have turned out much better, especially with the sharpness of detail. The sound is presented in a rather powerful DTS HD Master Audio 5.1 mix, which simply can't keep up with larger cinema productions in terms of surround effects. All in all, okay, but no revelation. Good!

Extras: Only the trailer and further program tips of the provider are available here.

Fazit: In the meantime even the last one might have noticed that movies about mutated sea creatures, giant snakes or other fantasy creatures are first and foremost trash. Sharktopus vs. Pteracuda" is no exception. Those who take films like these seriously, expect sophisticated dialogues or first-class effects, are to blame themselves. But if you are just looking for brainless fun and have a general weakness for Sharktopusse, Sandsharks, Mega Piranhas or Sharknados, this wonderfully trashy duel will also be a great pleasure for you. The Blu-ray presents the film in decent picture and sound quality, but viewers have to do without significant bonus material. Only for fans - but for them: recommendable!