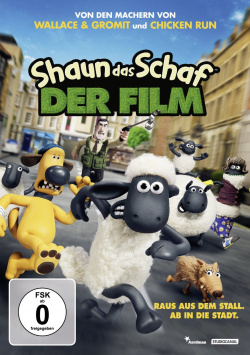 Shaun the sheep - The film - DVD

Film: Life on the farm is actually very relaxed and idyllic. But at some point the daily routine is just too boring for Shaun the sheep. He wants to take a vacation from everyday life and just have fun. He already has the perfect plan for it - but it's going a long way wrong. And so Bauer is unintentionally transported to the big city, where he ends up in hospital with a loss of memory and the pigs meanwhile take possession of his little house. That's not what Shaun really wanted. Now there is only one thing left for him: he must save the city and the peasants himself. Although he actually wants to do this alone, his faithful herd joins him. Together with dog Blitzer the sheep make the big city unsafe and have to survive all kinds of turbulent adventures to get their farmer back...

Twenty years ago the lovable kneading sheep Shaun appeared for the first time in the "Wallace & Gromit" short film "Unter Schafen" and immediately captured the hearts of the audience. Soon there were Shaun figures, Shaun backpacks and numerous other merchandising. The sheep became so popular that the "Wallace & Gromit"-makers made him the hero of his own TV series from 2007. There are now 130 episodes, each lasting seven minutes, which are an absolute cult not only for children. Just in time for his twentieth birthday, Shaun and his friends can now experience a great cinema adventure. But can the concept, which has worked well for years in the clips lasting only a few minutes, also be successfully extended to feature length? Or does this overdose cause even the most loyal fans to get bored?

The answer is quite simple: "Shaun the sheep - The movie" is simply wonderful from the first to the last minute. The directors Richard Starzak and Mark Burton and their team of 17 animators and 21 model makers have created a magical film for the whole family. Larded with countless small and big gags, the lovingly staged film simply spreads a good mood. It's just fun to get lost in the turbulent story and discover the many little details that the creators have built in, sometimes obviously, sometimes hidden. Here it becomes clear in every second how much passion, heart and soul and love were worked with.

Surprisingly positive is the decision of the makers to completely do without dialogues in the film as well as in the series. The beautifully animated facial expressions of the characters and small gestures are enough to convey to the viewer what dialogue couldn't have said better. Even people are only allowed to make incomprehensible murmurs, but even here different dialects are recognizable. This really delicious effect would certainly have been destroyed by proper dialogues. Also here you can see: sometimes the true power lies in the simplicity.

"Shaun the sheep - the film" is childish, but not childish, full of slapstick without being silly and fast, without losing its charm in too much hectic action. It is a film full of heart and warmth that is never kitschy. Plasticine figures have probably never been so wonderfully human. Those who liked the TV series or the "Wallace & Gromit" short films will love this shaftastic film. A timelessly beautiful fun for every age, which allows only one conclusion: Määääääääääähäh (Translation: Absolutely worth seeing!)

Picture + Sound: The picture of the DVD has a pleasant depth and a very high overall sharpness. Even the smallest details come into their own. The colours are mixed very powerfully and also the contrasts are excellently co-ordinated. Like the picture, the sound in Dolby Digital 5.1 also leaves an overall positive impression. A successful three-dimensionality, many rich sound effects and the clearly understandable blocks of Shaun and his friends provide a first-class sound carpet. Very good!

Extras: Beside an interesting, but too short Making of (ca. 12:06 min.) there are also some interesting Promo-Featurettes about the characters (ca. 3:54 min.), the makers (ca. 3:04 min.) and the work behind the scenes (ca. 2:25 min.). In addition there are film excerpts to the music of Tim Bendzko (ca. 3:09 min.) and Tim Wheeler (ca. 2:58 min.). The trailer rounds off the bonus package. All extras are available in German or with German subtitles.

Fazit: "Shaun the Sheep - The Film" is a work full of heart and warmth, a wonderfully funny, original and charming film for the whole family. A movie full of wonderful little things, that you only discover after watching it several times. That's why it's worth buying the technically very well realized disc, which also has some nice extras on board. Buy it!