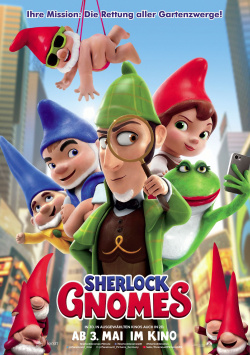 The lovely garden gnomes around the lovers Gnomeo and Julia are back. But there are dark clouds in paradise. After the move to London, the two of them will be in charge of the new garden, which means that Julia has no more time for her Gnomeo. For the first time the two of them really get into each other's wool and there is no time for reconciliation. Because everywhere in the neighbourhood all garden gnomes disappear in a mysterious way. And also the friends and families of Gnomeo and Juliet got it. Now it's up to the two of them to save the other pixies. Fortunately, they get help from master detective Sherlock Gnomes and his faithful assistant Watson. Sherlock Gnomes is certain that his mortal enemy Moriarty is behind the disappearance of the dwarves. But is he really the enemy? And is there enough time to save the garden gnomes?

It took six years before the garden gnomes from Shakespeare's charming gnome adaptation of "Romeo and Juliet" were allowed to storm the cinemas again. After "Gnomeo & Julia" with its original gags, the great soundtrack full of classics by Elton John, who also produced the movie, as well as some charming characters has become a surprise success, a sequel was actually inevitable. Nevertheless, it took so long that most viewers probably forgot the first part already. But that doesn't really matter, because apart from the characters and the Elton John songs, "Sherlock Gnomes" has little in common with  "Gnomeo & Julia".

While the idea of having Shakespeare interpreted by garden gnomes  worked well in a wonderfully absurd way, the gnome variant of "Sherlock Holmes" somehow seems too forced. Especially since the gags that result are probably only understood by adult viewers. The humour, which is more aimed at the children in the audience, is not as charming and accurate as in the first film. Even though there are still some really good laughs to be found, the movie as a whole seems like a somewhat unkindly made-to-order work. According to the  motto: We have to make a continuation at any price, even if nobody really wants it anymore.

That may sound pretty nasty now. But even though "Sherlock Gnomes" isn't a really bad movie, it still lags far behind the potential that its predecessor was able to exploit so well. And - this has to be said - "Gnomeo & Juliet" was despite many good ideas and wonderful ideas by far not a masterpiece of modern animated film. For an entertaining cinema afternoon, Garden Gnome Holmes may be a good choice. But more than nice entertainment for in between the movie is really not worth watching - and therefore only with restrictions for animation fans from 5 years!