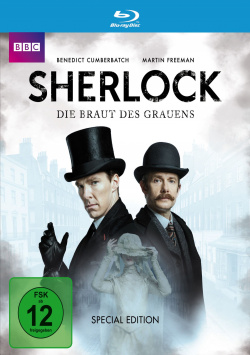 Sherlock - The Bride of Horror - Blu-ray

Film: It will be some time before the fourth season of "Sherlock" flickers across our screens. The busy schedules of Benedict Cumberbatch and Martin Freeman make the waiting time for the fans almost unbearable. But now comes at least a small dose of the cult series in the form of a special, which should make waiting for new episodes a little more bearable - only to make the desire for new material around the master detective even greater at the end.

A different than the previous episodes, the special takes the audience to Victorian England in 1895: Sherlock Holmes (Benedict Cumberbatch) and Dr. Watson (Martin Freeman) are asked by Inspector Lestrade (Rupert Graves) for help. Scotland Yard is investigating a case that is more than a headache for Lestrade and his team. Emilia Ricoletti (Natasha O`Keeffe) has taken her own life after shooting indiscriminately into the crowd from a balcony. But only a few hours later she was watched as she got out of a carriage and murdered her own husband. Has "The Bride of Horror" come back as a ghost? Or does Emilia Ricoletti have a doppelganger? A tricky puzzle that only a genius like Sherlock Holmes can solve. But this case takes him almost to the brink of madness - and for a surprising reason…

With his original reinterpretation of the stories around the master detective Sherlock Holmes, series creators Steven Moffat and Mark Gatiss celebrated great success in the summer of 2010. When it was announced after the end of the third season that the fans would have to wait until 2017 for new cases of "Sherlock", it was initially a small shock that was somewhat cushioned by the announcement of a Christmas special in December 2015. When it became known that this special would play in 1895, it looked like it was telling a story completely detached from the rest of the series. And this seems to be the case at the beginning. But without revealing too much, "The Bride of Horror" has a direct connection to the events of the third season and sets events in motion in a surprising way that will have a direct impact on the next season. As a result, the desire for the new episodes was increased at the end of the special and the waiting time became even more unbearable.

The special actually starts quite conventionally. Entertaining, but not really surprising. The twist that it plays this time in the original Sherlock Holmes era and not in the present is nice, but nothing more. But then the story takes a really surprising turn. Here the whole thing becomes a bit bizarre and a bit confusing. But it's worth staying on the ball. Because when it reveals how this episode is embedded in the series, it's just great! Benedict Cumberbatch once again delivers a brilliant performance as Sherlock, who is in no way inferior to Martin Freeman as Watson.

More should not be revealed here. Therefore a advice to all fans: Buy this disc and watch the special several times to discover every little detail. It's worth it! Absolutely worth seeing!

Picture + sound: As with the first seasons, the technical implementation of this very special Sherlock series is also on a very good level: The picture is clean, the overall sharpness is on a good to very good level and the rather discreet colouring captures the very special atmosphere of the special perfectly. The good DTS-HD Master Audio 5.1 mix is primarily determined by the dialogues and the soundtrack, but some well used sound effects and atmospheric ambient noises provide a lot of movement in the surround area. Good.

Extras: In addition to the 90-minute special, there are almost as many minutes of bonus material. We start with a look at the series with author/producer/co-creator and Mycroft actor Mark Gatiss (ca. 28:34 min.), as well as his short production diary (ca. 4:54 min.). This is followed by eight short featurettes on the creation of the special, which provide a good insight into various aspects of the production in a total of just under 30 minutes. In addition there is a conversation between Gatiss and his colleague Steve Moffat, with whom he created the series (ca. 3:40 min.) and some answers from makers and actors to questions from the #1 fan page to the series (ca. 19:35 min.). Very good.

Fazit: This special by "Sherlock" begins rather conventionally, before it unexpectedly reveals a complexity and abyss, which makes enormous desire for further episodes, for which we must wait however still until 2017. The Blu-ray presents the special in very good picture and sound quality and also has almost 90 minutes of worthwhile extras on board. That's what it's all about: absolutely recommended!