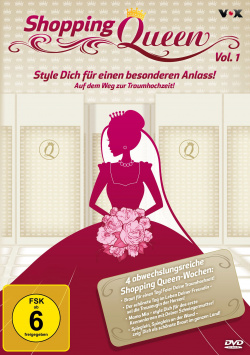 Contents: Guido Maria Kretschmer and his Shopping Queens have long been cult. Since the beginning of 2012, the programme has been a reliable quota guarantor in VOX's afternoon programme. The concept of the reality show is very simple: Each week, five women in a city have to put together an outfit on a specific theme, which is then judged by the contestants at the end of the show and by juror Guido Maria Kretschmer at the end of each week. The sometimes very unconventional candidates who, under the pressure of time (each of them has four hours to shop for the perfect outfit) and budget (500 Euros for clothes, shoes, accessories and hair/make-up), are on the verge of a nervous breakdown - to the delight of the audience, of course.

However, the very special charm of "Shopping Queen", and thus also the unbroken success of the show, is made up of the off-comments by speaker Thorsten Schorn and, of course, the wonderful reviews by presenter Guido Maria Kretschmann. The successful fashion designer says quite openly whether he likes an outfit and he also doesn't always have nice things to say about the behaviour of the candidates in the shopping craze. But it's his very likeable way to always let a certain kind of respect and charity shine through even at the worst blasphemy, which makes him so popular with his fans. You can't be angry with him, no matter how biting his comments are.

Who is not satisfied with the daily dose of "Shopping Queen" can be happy now: Selected episodes are now published on DVD. Vol. 1 of the series presents on four DVDs a total of 20 episodes around the topic "Style yourself for a special occasion! On the way to the altar". On DVD 1, five ladies from Stuttgart have to turn into a "bride for a day". The self-proclaimed chick and beauty queen Maren shocks on the very first day with a red wedding dress, while the divorced Nicole in Leo look steps onto the catwalk. Frog lover Jenny is not exactly relaxed when shopping and has problems with her dress to keep her bust in check. Conny, who has only married as a civil servant, is fully on her way this week, as she dreams of being able to get married in a church after all. And candidate number five also gets very romantic feelings when searching for a wedding dress, as she has already found her matching dream prince.

The second week takes us to Kiel, where the motto is "The most beautiful day in the life of your girlfriend", to put something back and to style herself as the perfect maid of honor of hearts. The sports scientist Nina doesn't quite fulfill this motto, because her outfit screams for attention as much as the fact that she starts singing while walking on the catwalk. Guido, on the other hand, is completely enthusiastic about candidate Katja, an educator with heart and soul who, in his opinion, also implements the motto well. But the tattooist Iris, on the other hand, has the funniest sayings of the week, and even the housewife Dilek, who jumps from one shop to the next, knows how to comment on a lot with a sharp tongue. Financial advisor Kristina rounds off this week with chic elegance.

Week 3 invites you to wild shopping in Berlin. A special feature here is the fact that only for the second time in the history of the series does a man take part. Like graphic designer Sina, real estate agent Daniela, educator Sylvia and nurse Carola, stylist Vincenzo also has to style himself to get to know his mother-in-law for the first time. A very colorful week, in which there are some bitchiness and in which a candidate even puts her relationship at risk through her shopping behavior. Week 4 will also take place in Berlin and will once again be looking for the most beautiful bride in the country. As in week 1 there is also this time an increased budget of 1.000 Euro. Dentist's assistant Kitty, with whom the hairstyle threatens to become a disaster, physiotherapist Sabrina, who simply finds everything beautiful and is very happy about everything, Christina, who is constantly called "treats" by her shopping companion, the freelance artist Katja, as well as Nadja, who has a strong esoteric touch, make sure that this week again is a lot of fun.

All these episodes make it clear why the actually very simple success concept of "Shopping Queen" has been working so well for over three years now and also stands out quite pleasantly from other reality shows of this kind. Therefore for fans: Nothing new, but still absolutely recommendable!

image + sound: The picture of the DVD is very clean and has a good overall sharpness, as well as a harmonious color scheme. The stereo sound is rather unspectacular overall, but makes the voices and off-comments sound clear and powerful from the speakers. For a TV documentary series like this, that's perfectly satisfactory. Good!

Extras: Unfortunately the box has no bonus material to offer.

Fazit: "Shopping Queen" has been a quota guarantor for Vox for almost four years. Fashion designer Guido Maria Kretschmer and his comments are an absolute cult. Kretschmer comments on his candidates on their wild shopping tours in a biting, but nevertheless always sympathetic manner. If the daily dose of the reality show on Vox is not enough for you, you can now buy some selected episodes on DVD. Vol. 1 focuses on the most beautiful day in life. Four different motto weeks with a total of 20 episodes are collected on the four DVDs of the box. Even if there is no additional material, "Shopping Queen" fans are well entertained here. Recommended!