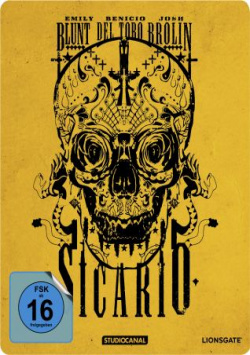 Film: The young FBI agent Kate Macer (Emily Blunt) knows all the facts about the drug war that is being fought with extreme brutality in the border area between Arizona and Mexico. But the idealistic agent is so shocked by the cruel discovery she makes in the secret hideout of a drug cartel that she does not hesitate for long when she is offered a position in an international task force to hunt down the masterminds. Together with US agent Matt Graver (Josh Brolin) and Colombian agent Alejandro (Benicio Del Toro), she is to accompany a prisoner transfer in the border area that turns out to be a bloody ambush. But with Alejandro's help, the mission can still be completed successfully. But now at the latest Kate is aware of the means by which they are fighting on both sides and that she will lose this war if she continues to hold on to her moral convictions…

With "Sicario" the Franco-Canadian Denis Villeneuve ("Prisoners") has delivered no less than one of the best films of the past year. There is hardly an aspect of this film that doesn't work. The story itself is very exciting, but the atmospherically dense staging, the film music suggesting a constant threat and the intensive visual language intensify this many times over. This becomes particularly clear in the scene showing an operation in a tunnel between the USA and Mexico. From the moment Kate and her team enter the tunnel until the finale of this sequence, the viewer is literally pushed into the cinema chair and clings to the seat backs almost without noticing it. Such scenes can only unfold this really intense effect through the perfect interplay of all factors. Since Villeneuve orchestrated them with great precision, she succeeds in doing so several times during the course of the film. This is how perfect tension cinema looks like.

Another very successful aspect of the production is the depiction of violence. Villeneuve is really not squeamish about this. But he doesn't use brutality boldly, but lets it run almost by the side. Thus it does not appear overstylised, but very real - and therefore also extremely shocking. Good examples of this are the really cruel find made by the FBI at the beginning of the film, but also the pictures Kate - and thus also the viewer - is confronted with during her first deployment in the border area marked by the drug war. These are images which will continue to follow you long after the end of the film and which contribute considerably to the thriller's intense effect.

screenplay, direction, camera, music, editing - all these aspects can be as good as they may be if the acting performance is not right. But Villeneuve also proved a very good hand in the selection of his actors. There is no really weak link in the strong chain of actors here. Those who are supposed to be shady are shady, those who are supposed to come across as greasy disgust are played the same way and those who are supposed to appear tough and idealistic give their figures exactly these attributes. Emily Blunt once again proves that she's not only extremely versatile, but that she also knows how to convince in action. But even though she delivers first-class results here, it is Benicio Del Toro who leaves the most lasting impression. The decisive factor for this is a scene at the end of the film, which is probably the most uncompromising of the mainstream cinema scenes of recent times.

Even with the most intensive thinking, I simply can't think of any real point of criticism. Josh Brolin's loud chewing gum may be a bit annoying, but it fits his figure perfectly. "Sicario" is simply a great, multi-layered thriller that blurs the boundaries between good and evil more and more and offers several moments that will shape this genre for a long time to come. Absolutely worth seeing!!!!

Picture + sound: The audiovisual realisation of the film for Blu-ray can be convincing in almost every respect. The image has a pleasant depth and excellent sharpness of detail. The harmonious colour mixture also supports the very positive overall impression, which is not disturbed by blurring or other weaknesses even in the darker moments. The powerful sound is present in an extremely lively Dolby Atmos mix, which perfectly transmits the suspenseful atmosphere of the production into the home cinema. Very good!

Extras: Even if you would have liked to know a lot more about the making of this great movie, the four short documentaries offered in the bonus material are quite satisfying and absolutely worth seeing. We start with a look at the visual design (approx. 16:44 min.), which focuses on the intensive visual language of the film. Then it's about the actors (ca. 14:33 min.), the great film music (ca. 6:17 min.), as well as the true backgrounds that served as inspiration for the script (ca. 13:39 min.). Worth seeing!

Fazit: With "Sicario" the Franco-Canadian Denis Villeneuve ("Prisoners") has delivered no less than one of the best films of the past year. There is hardly an aspect of this film that doesn't work. On the Blu-ray, the gripping thriller shines through a harmonious picture and sound quality. The bonus material is very interesting and worth seeing, even if you would have liked to see a little more of it. Altogether there is a very clear one for this disc: Absolutely recommendable!