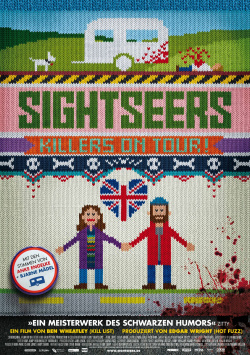 Film: Since the beloved dog of her mother Carol (Eileen Davies) died by a terrible accident, the life of 34-year-old Tina (Alice Lowe) consists only of hostility from her mother and constant frustration. That changes when she meets Chris (Steve Oram). There's an immediate radio link between the two, which is why they quickly decide to travel through Yorkshire together in a motorhome. Although Carol finds her daughter's new boyfriend more than suspect, Tina doesn't let herself be deterred from starting a hopefully nice holiday. In fact, the joint excursion begins extremely idyllically. But when Chris witnesses an act of lesser environmental pollution and is outraged by the rage of its perpetrators, Tina realizes that her lover is not the gentle man she thought he was, but an easily irritable serial killer from whom she should flee as quickly as possible. But Tina doesn't even think about skipping her vacation. After all, she crocheted extra pink sexy lingerie for this occasion, which is supposed to be used damn well as well. And somehow the somewhat exaggerated sense of justice of Chris is also quite appealing...

"Sightseers" is a raven black comedy, in which british boredom meets blood dripping absurdity. Director Ben Wheatley, who recently drew attention to himself with "Kill List", knows how to mix dry wordplay and macabre scenes to an unusual, but very entertaining whole. And it's not only the murders and the motives that lead to them that make up the bizarre character of the film. The real places where the story takes place also play an important role. Whether it's a campsite, a pencil museum or a site where historic railways take visitors around, all these are places that show a very different side of Britain that you hardly ever see in a film.

That the film works so well over long stretches and offers good entertainment except for a few small trailers in the last third is not only due to the direction, the camera work and the wonderful song selection for the soundtrack. What really matters is the fact that Alice Lowe and Steve Oram, who also wrote the script together, developed their roles over several years and internalized them so much in the course of the different stages of development that they almost completely merge with these weird characters. The fact that they improvised a lot of dialogues doesn't seem to be stilted or troubled, but absolutely natural, which also makes the humor work a lot better.

Admittedly, after the very original and sometimes very bad beginning the movie seems to run out of breath towards the end. There are always some amusing moments for friends of black humor. But there are also some smaller lengths noticeable, which at least temporarily diminish the otherwise positive overall impression. The consequent finale quickly compensates for these small weak points.

The German distributor has made a lot of effort to translate the very special humor of the film into German. For the dubbing of the two main characters with Anke Engelke and Bjarne Mädel ("Stromberg", "Der Tatortreiniger") two prominent voices could be won to guarantee that "Sightseers" is also fun in the German version. It remains to be hoped that these two well-known names will perhaps help to give this evil little comedy the attention it deserves in Germany as well. If you like British humour of the evil kind and extremely unusual serial killer movies, you should definitely travel through the English pampas with this weird couple. It's worth it!

Picture + sound: The picture on the DVD is particularly appealing with its atmospheric colour scheme. The picture sharpness is generally on a good level, whereby the picture sometimes appears a little blurred here and there - but this can also be seen as an intentional stylistic device. The sound is relatively unspectacular, as the more centrally mixed dialogues and the good soundtrack set the tone here. Every now and then, however, a few well-transformed ambient noises or smaller sound effects ensure that the surround channels are also used. Good!

Extras: The bonus material is a bit meager. The extras of the British DVD (Behind the Scenes, Outtakes, Audio Comments) unfortunately didn't make it onto the German disc. Here viewers are offered interviews with Alice Lowe (9:28 min.), Steve Oram (10:13 min.), director Ben Wheatley (10:37 min.), as well as dubbing actors Anke Engelke (3:25 min.) and Bjarne Mädel (2:59 min.). In addition there is a small view of the work in the Synchronstudio (5:36 min.), as well as program tips of the offerer.

Fazit: "Sightseers" is a raven-black comedy of the particularly British kind, which blends up clamped Biederkeit with brutal blood thirst to an amusing whole. Although the whole thing runs out of breath towards the end, friends of evil humor still get their money's worth. The DVD is technically well done, the bonus material is informative, but also a bit superficial. Nevertheless the bottom line is very clear: Recommended!