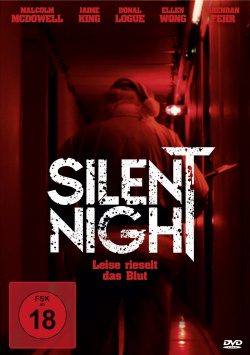 Film: Small town cops Aubrey Bradimore (Jamie King) and sheriff James Cooper (Malcolm McDowell) are prepared for the usual Christmas stress of drunken rioters and domestic disputes. What they didn't expect, however, is that a serial killer disguised as Santa Claus would haunt their little town and further reduce population density. But since there are countless Santas on the streets during the traditional Christmas parade, it is almost impossible to spot the killer among them. But Aubrey, who has just lost her beloved husband, doesn't want to let there be more deaths. Before the snow in the small town has finally turned blood red, she wants to hunt down the killer - not suspecting that he has already set his sights on her...

With "Silent Night" director Steven C. Miller has staged a very free remake of the 1984 slasher "Silent Night - Horror Night". In doing so, he gets so bloody to the point that his black humorous activities were denied release by the FSK in an uncut version. For the 18 version, almost 38 seconds of material had to be removed - among them the probably most original, but also most unappetizing murder sequence of the film. Of course every second cut is one second too much for true slasher fans. Nevertheless, it has to be conceded to those responsible that the cuts were done relatively well, so that even the shortened version still has enough show values to offer.

Because despite a very conventional plot and the very one-dimensional character drawing, Miller's wonderfully exaggerated staging not only ensures that the film is a lot of fun. He also manages to build up a really good atmosphere, in which besides the humor there is also a bit of tension. Sure, the big surprises don't come. And also real goose pimples only come up very conditionally. Nevertheless, the whole thing never degenerates into senseless and thus tiresome slaughter, but can entertain in its own way also dramaturgically and atmospherically really well.

Award suspicious is of course still not. But that's not what Miller's about. His primary aim is to offer the target audience fun - and his production does full justice to these intentions. It's not for the tender of heart, nor for genre fans who prefer dark, serious horror. But if you appreciate classic slasher entertainment that doesn't take itself too seriously, you'll get everything you can expect from a movie with the subtitle "Leise rieselt das Blut", both in the unabridged and in the slightly edited version. And there is a very clear one for that: Worth seeing!

Picture + sound: Since only a press stream was available for the test, an evaluation of the final picture and sound quality cannot be given at this point.

Extras: Also the bonus material could not be tested. Interviews, Deleted Scenes and the trailer are announced.

Fazit: "Silent Night" is a successful remake of the 1984 slasher "Silent Night - Horror Night". Director Steven C. Miller serves up his festive battle record with a lot of bloody humor, some hearty splatter and even a good portion of tension. This may not be suspicious, but genre fans will definitely get their money's worth here. The FSK 18 socket is shortened by almost 38 seconds, whereby the cuts were made quite well. Nevertheless fans of course take the uncut Spio/JK version. Altogether there is a strong Ho! Ho! Ho! and a satisfied: Recommendable!